by some divinely wrought swizzle 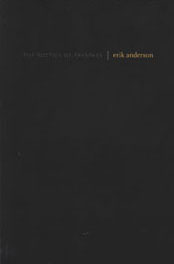 The Poetics of Trespass

A thought does not have to be thought. In fact, a thought is not—as we thought, a product of the reasoning mind. The mind is a collection. Merely and as much. Infinite, given that even the finger that traces a line in The Poetics of Trespass, follows a path that is nowhere, and is endless. A passage among passages, a project of disownership and propulsion. A ghost-making expedition.

Erik Anderson stepped the word “pastoral” across a twenty block-span of Denver, retracing his steps to shape the letters onto the city and brush this urban landscape onto a textural canvas. He juxtaposes his material encounters with mattress springs among alley detritus with Tintoretto’s “The Rape of Helen,” a painting chanced upon via newspaper, and a Ming Dynasty scroll, “Mountain Landscape,” which he sits before in a museum chair in a frequently unoccupied room dedicated to “The Scholar’s Tradition.” Layers of implication accrue in this poetics of space and lyric as stack and seam fold together.

And then a non-gentle man pisses on the sidewalk, and he too is accounted for by Heidegger’s consideration of man as a “shepherd of being,” as one who watches carefully, or is followed. One who protects a group of sheep or people. Who watches us if we do not watch ourselves? “Look!” the children cry for a time, and then they stop.

Anderson’s poetics is as concrete as it is conceptual—a treat of the schooled writer able to walk with “my heart at my feet.” But the “I” is markedly absent for pages of traveling. I lay the text aside at several points, (though compelled to read it in one sitting, like a movie) feeling eaten away like a coastline. “I?” I wondered, trying to hold it. But it disappears, like Frank O’Hara’s stars in “Music,” which Anderson likens to Robert Smithson’s Spiral Jetty for its invitation toward undoing. Like a great cosmic blow-out party favor whose timbral buzzing fades into a whetted silence.

“But what if I do not want to disappear?” The self asks, disappearing, for “one writes oneself,” Anderson says, “into being at the expense of the self.” Poets never were strategic accountants. A business major would have better negotiated this paradigm, but then, she might have traded the “shells, like ruins” of language so richly phrased the lives of former inhabitants become “an aura [that] emanates from within.”

The landscape is well-mapped in its references, such that an interested reader can explore the extended margins of the elaborated footnotes that include such rewarding anecdotes as an etymological explanation of how our neighbors, the East Anglians, got to be such terrific “bors,” while the rest of us move around, peripheral to existence and “clown around in proximity to ourselves.”

To be a poet, Anderson says quoting Raymond Williams, “is, ironically, to be a pastoral poet.” The passage images the poet as shepherd of words, or as Anderson augments, listener of “pin drops in pulpits,” gatherer of records, as the gatherer slips into the vast gaps of it.