New York City is presently sighing with relief as Poets House, after a long sojourn in boxes, is unpacking and setting up shop again to serve writers and lovers of poetry. Manhattan is fortunate to host this institution. The new facility–now located at 10 River Terrace–is architecturally full of space and light and, though shiny and new, still retains a smile of welcome.

Lee Briccetti is the director. She is a grounded, affable woman; herself, a remarkable poet. With much of the focus being on the new, one also takes a moment to reflect on what New York City and the people dreaming in the city have experienced. The new Poets House is actually a stone’s throw away from the site of the September eleventh attack on the World Trade Center. A few years back Briccetti—one of those dreamers— published her own love letter to the resilient city she lives and works in. 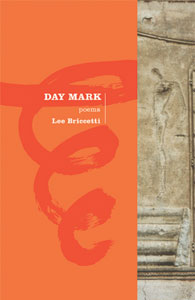 Lee Briccetti’s first book, Day Mark, awaits–and deserves–lengthy and subtle reviews. The aphoristic glints of the poems’ images resist category and corral––but what they do give is poetic pause and shimmer.

The opening epigraph is from The Tempest. (Peter Greenaway making a movie out of “Day Mark” is an interesting notion to entertain.) At the end of the book, the poet notes:

I still love the Egyptian Museum in Torino, where shards
and sarcophagi are not labeled or even exhibited but set in
open shelves which extend

to the limit of (visible) ceiling

(“Index to the Collection”)

Day Mark brims with physical and literal aphorisms of Western Culture. There are parts of cities. Rome conjures the idea of the wondrous and the terrible. (It is, among other things, the location of the death of the great and venerated English poet John Keats.) New York City conjures the idea of the concrete and imaginary wilderness, of walking in the western night. Both Rome and New York––like Herculaneum and Pompeii––are cities of promise . . . and ruin.

Day Mark is also an elegy. Angels arrive from the Old World and terrorist commandeered airplanes arrive in the New. In one of the poems, a poetic footnote is employed:

At the Protestant cemetery, we enter my language. Violets
surround the poet’s nameless stone, “whose name was writ
in water.”
But it’s the adjacent stone and destiny of the friend who
held the dying poet in his arms that consecrates a grief.
To be so true.
Years.
A lifetime.
He took the ambassadorship so he could die in Rome
and give back the name: “Here lies Severn, friend of John Keats.”

(“The Reign of Good Emperors”) 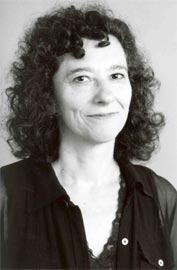 Day Mark is a literary celebration. H.D.–eyeing domestic kitchen implements hanging in bombed out London apartments–and Djuna Barnes are spiritual mothers of Day Mark. Briccetti herself evokes Marie Ponsot in one of the epigraphs. She also evokes Chaucer, Shakespeare, Coleridge, Keats, Hopkins, and George Eliot. From Americans, she elects to evoke Melville, Dickinson, and Robert DeNiro. She veers into Italian poetry for Pasolini.

Day Mark is also a book about dreams. There is the Stendhalian dream from the Old World–that love is about seeing and being seen:

A few weeks after we were married, I dreamt we lived
in Rome, on the edge of the Barbarini Gardens

We believed we had two countries (a fertile alienation),
our love would make the margins verdant,

but this is important: some rim of marble or ancient paving
stone must appear in each frame,

us: our buttery light

Like the Egyptian museum in Torino, Day Mark “extends…to the limit of a (visible) ceiling.” The conglomeration is conceived to be greater than any one poem. Curiosity, patience, and introspection have amassed a personally charged and eccentric collection. The shelves are open. Reward awaits the willing visitor.

Scott Hightower is a poet living with one foot in New York City, one in Texas, and one in Madrid. His third collection, Part of the Bargain, received the 2004 Hayden Carruth Award. His translations from Spanish have garnered him a Willis Barnstone Translation Prize. He is a contributing editor to The Journal, and his reviews frequently appear in Coldfront Magazine and Boxcar Poetry Review. He teaches at NYU, and has taught poetry, non-fiction, and translation at Drew, F.I.T., Fordham, and Poets House.