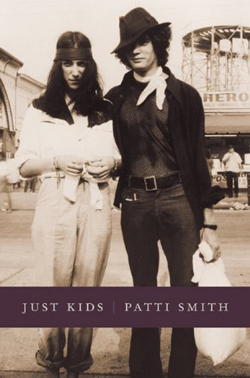 Deeply personal and insightfully written, Patti Smith’s New York story delivers the emotional narrative that Bob Dylan’s Chronicles left readers wanting. Tracing the relationship between Smith and photographer Robert Mapplethorpe, Just Kids explores the thriving artistic community of New York in the 60’s and 70’s and paints a portrait of two eccentrics, two searchers, two creators, as they navigate their way through art, sickness and each other.

It is invigorating to read about the city forty years ago, where artistically, anything seemed possible and collaboration was abundant. Accounts of Smith and Mapplethorpe’s interactions with artists like Salvador Dali, William Burroughs, Andy Warhol, Tennessee Williams, Janis Joplin, and Jimi Hendrix are scattered throughout Just Kids. Smith recounts her and Mapplethorpe’s years at the famous Hotel Chelsea where they immersed themselves in poetry, theatre, music, and photography with some of the country’s most exciting minds: Smith writes a play with Sam Shepard, sings a song for Janis Joplin, discusses poetry with Alan Ginsberg.

Most compelling, however, is Smith’s depiction of her dearest friend Robert Mapplethorpe. With a tender candor she walks us through the enigmatic artist’s formative years as he grapples with demons, works ferociously, and strives for recognition. One learns how Mapplethorpe’s own conflicted sexuality and religious upbringing influenced his work and ultimately led him to choose photography as his medium.

Just Kids demonstrates why Smith is a great American storyteller, and the strength of her prose never lets us forget that she began as a poet. This is a book I urge any artist to read, if not to help us recapture the artistic energy of days past, then at least to celebrate it.