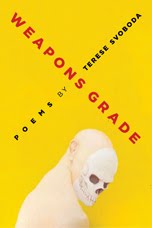 The Oracle and the Sybil are moments somewhere along the way in history that mark institutional attempts at the preservation of the tradition of wisdom and truth telling. Neither is directly transparent. In 2009, Terese Svoboda’s throws a new set of her poems, Weapons Grade, into the mix.

The book is divided into four parts. The poems in the first section are overtly political, very dark, and very impressive. In one, there is a convoy of body bags. In another the litany of O’s weave from Suzie Wong’s nipples to nooses—but in fact are the zeros of records of African-American GI’s secretly executed by American Forces in occupied Japan—assumedly for the crime of rape. There is a conflation of history. King Henry’s dogs tracking in the blood of hanged men balances with the white gloves of American GI MP’s. The gloves are as white as the record of executions is blank.

In another poem, “Code Name: 731” Svoboda spells the connection between the almost unbelievably, horrible Japanese science experiments of WWII and the Tokyo lab, which in the 1990’s distributed AIDS-laden blood for the transfusions of unknowing patients. Our darkest corners are not mirages; they are gruesome historical facts. The poem begins with a land developer unearthing one of the grizzly WWII 731 labs. Files follow. At the close of the poem, the notions of secrecy and the horrible nature of things buried away hitting the light of day are jarringly simple: How much cold can a body take? / How little liver? / The boys’ bones turn up in the Tokyo lot.

Svobda splices a line: Say Can You See? what the century is made of.

In the first section of Svoboda’s book heartland patriotism and bravado are flaunted by a provincial adolescence. It is a macabre song of misguided innocence:

…Those horns-of-dilemmas
re: you vs. them
will soon be blown
until they’re scarcely heard—
that Vietnam. The band
puts out its collective foot
and the wind [of a Sousa march is]…
taking off…with lunch’s
doubledecker detritus flipping
in its wake, in the doubletime

that the majorette kicks to,
a Whoopee, let’s march together at last
into the adult arms of death,
death, death until no one’s left.

In another poem, the tone is more prayerful, more plaintive:

Oh Mothra, so Mother, so monster,
your wings over the egg—
save us too.

And in yet another, the tone becomes abject:

Impotence is not in any animal’s genes,
it has to be earned. Forget the rocket’s
red glare you so dearly love

and tear down that bright banner blood.
We can’t be moths attracted by light,
we must—boy–chew at the fuse. 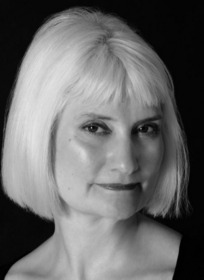 The poems of Sections II, III, and IV shift away from the military themes of stealth, abuse, and fear and into a question of balance as set into a personal landscape, or as Svoboda references it—to the glen of the heart. In Section II, the theater is marriage. There are tracks in the snow and messages in the camp ashes. Intimacy get misplaced and recovered in the balancing of the equation of X and Y; the day’s / global position ratchets / into place with a purse click. The balance of power languidly dreams while the colonial teapot gleams and steams.

The poems in Section III shift to domestic issues of the nuclear family—the mystery is love not fear. Grief, damage, and fear, as a kind of death, re-surface in this section. In one poem, a woman loves her beater. The kitchen and abuse conflate. Things appear—and disappear. “The fury and majesty of a mind’s death” is featured in “the loss” of a brother. It is only the people with navels (“evolutions blind trajectory”) that have issues:

Mom, a palindrome
soon enough on stone.
In the fairy tale she grows
fur and claws, and tries to eat us.
In nomine matri.
Sweet, sweet, she says, caramel foaming.

She’s not even hungry.
Tomorrow we’ll throw open the doors
and invite everyone to the screening,

every frame forgiveness
but with subtitles too light to read.
You, we, I—it’s all too intimate.

The winnowed take a stiff drink, Lethe’s.
After this first death, there is no other.

(“To My Brother, One the Occasion
of his Second Breakdown”)

And in Section IV, grand design and doom join hands. In one poem fluid massing on the lungs appears as a warning of what is to come. In Section IV, there is a path, a widow, an evening of sailing on a lake, a glacier, and a bargaining:

To get anywhere,
I must appease,
offer salve,
pet the burnt orange and sooty
cows. They gasp, the ones not roasted
or poisoned, carrion-proof

for they have swallowed the dust.
The problem devolves
to the animals, splayed belly-first
in the hopeless state,
the pride of.
I’m thinking who what
where like a journalist,
I’m still trying to see the glacier
a-glitter, saved.

There is also a road taken by two bicyclists who are overtaken by a car driven by Death. It hits–and disappears.

Svoboda’s poems are rewarding. She is brave–but the road she travels is not easy or for the faint of heart.

Scott Hightower is a poet living with one foot in New York City, one in Texas, and one in Madrid. His third collection, Part of the Bargain, received the 2004 Hayden Carruth Award. His translations from Spanish have garnered him a Willis Barnstone Translation Prize. He is a contributing editor to The Journal, and his reviews frequently appear in Coldfront Magazine and Boxcar Poetry Review. He teaches at NYU, and has taught poetry, non-fiction, and translation at Drew, F.I.T., Fordham, and Poets House.
Loading Comments...