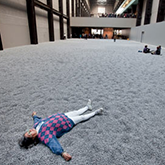 Chinese artist Ai Weiwei fills a room at the Tate Modern in London with 100 million hand painted porcelain sunflower seeds. Each one of the unique tiny seeds were produced by a team of 1,600 people in the small Chinese city of Jingdezhen. The exhibit was meant to be interactive, but was recently closed to the public due to concerns over the ill effects of inhaling porcelain dust.

The press release from the Tate Modern reads:

“…we have been advised that the interaction of visitors with the sculpture can cause dust which could be damaging to health following repeated inhalation over a long period of time.”

If the public is unable to interact with the work, was it all for nothing?