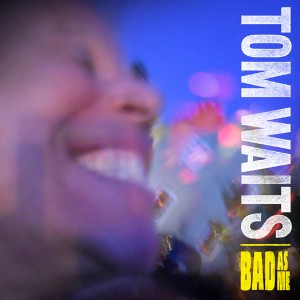 A friend of mine who’ll remain unnamed often tells a Waits story (most likely apocryphal, as if there were any other kind of Waits story)  worth re-telling: This friend, see, is coming off a bender in LA–uncertain, for instance, of how he’d arrived in LA in the first place.  He is certain only that someone has forced a roll of cheap toilet paper down his throat during a blackout and he wants to remain stuck shirtless and alone to the vinyl seat of an unknown automobile if only to avoid The World and its Otherworld turned somehow upside down–the heat of Hell clutching the roof with rays that knife through glass and finger holes into a brain no longer held aloft in the protective fluid of reality but sucked down by some malevolent Heaven against the dream of bone.  When darkness comes again he ventures a look outside only to realize he’s parked at a gas pump.  He finds a woman’s halter top in the front seat and decides to put it on in a desperate effort to cover the absurdity of his own nipples noticed as if for the first time.  And yes the tank is empty and yes he has no money and yes he sees a large winged pink Caddy convertible pulling up behind him under pumps lit dimly beneath humming fluorescents and yes it’s Tom no fuckin’ joke Waits.  And so he steps out and Waits looks him over slowly as if summoning the right words such a vision might call for.  He cuts his engine and looks at my friend earnestly now.  “You look bad, man,” Waits says.  And the way he tells it, my friend comes back, at that moment, to something like a world for the provisionally living, a world possible only because Waits is in it.

As for the new record…What are you waiting for?