I have now returned after a couple of days of drinking at the bars, and as a result, I had to stay in bed for three days just to get the sickness of alcohol out of my system.  After a year or so of straight sobriety, I relapsed, but luckily I am back in recovery, even though I’m not enjoying it too much.  Firstly, there is nothing else to do that matches the thrill of being really drunk and bar-hopping along Lark Street here in downtown Albany. 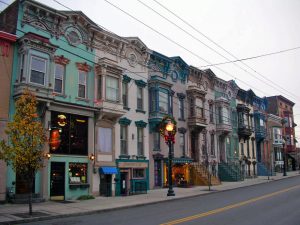 The problem is that I drink so much that I black out and then get thrown out of many places due to my terrible behavior.  On the last night that I had the drink in me, I must have been cut off and kicked out of some place, but it is all a blur, because I did blackout and now cannot remember what happened.  But aside from what had happened the last time I got really drunk, now that I’ve regained my sobriety there is nothing much to do around Albany.  I have been to the museums, the galleries, the movie theaters, and the mall.  I just don’t know what to do with myself now.  I am lacking motivation or any sort of ambition, as it is starting to become really apparent that I may indeed be a failed artist, which is something that I would loathe.

So the question that is driving me crazy is: what the hell is there to do in Albany beside drink at the bars?  I’m not really too sure, as I have been carrying this question around with me for quite some time now.  Sure, I can go and drink again, but this time I may get hurt out there, as I like to get into arguments and fights with the people I see at the bar – especially the bartenders.  Also, I would have to accept being sick and trembling in my bed due to my liver not being able to detoxify the alcohol.  So there is that to consider, because after a crazy night out on the town, I do remain in bed and am usually  too sick to do anything for a period of at least three days.

Granted that I am not interested in learning new things.  I’m not interested in making a novel that I’m working on ‘the Great American novel.’  I’m really just interested in seeing the beautiful women who all flock to the bars after the sun dips below the horizon for a final time.  I could go to the gym, but I am wary of doing any excersise at all.  I can go check out one of the minor league baseball games at Joe Bruno Stadium, and yet this doesn’t interest me very much either.  I can check out the New York Giants practice at SUNY Albany, but even this doesn’t interest me too much.  While it is true that the only thing that really interests me is writing, there is no longer a way to write without getting drunk whenever I feel the urge.  Writing and booze seem to go hand-in-hand, but it is certainly not the case that one has to be an alcoholic in order to write good books.   One can stay sober and write even better when booze is not around, and yet I crave booze right now.  I crave the comforts of the beautiful women whom I see at the bars.  I think I was even thrown out of a gay bar on Central Avenue, because really, no one likes me when I’m drunk.  I become this nightmarish creature whom the bar tenders immediately throw out.  I become combative, and I talk way too much for anyone to stand.

But I am returning to recovery, this is for sure.  I may hate coming back into recovery, but really it is the best thing for me.  I don’t know how to live without getting drunk, and slowly I’m going crazy by the sheer boredom of it.  I have been to all the coffee shops, and my ex-girlfriend, Lisa, has gone away for good.  Nowadays, I send an email to her, and she doesn’t reply at all.  And believe me, the spells of boredom that I have now won’t lift, even though I know there is to be work done on my novel.  I just keep pushing the revision work away, because I’m too damn lazy to care anymore.  I have this lazy brain that doesn’t want to think too intellectually about things anymore.  I’m not interested in anything, and there is no pleasure to be found.  I’ve even gotten down on my hands and knees and prayed, but even this doesn’t work right away – eventually, though.  What’s on the television makes me queasy, as I have five good digital channels, all of them churning out the same shit every day – the soap operas, the game shows, the talk shows, and the local news – all conspiring against me, such that I’m too bored to even go out of the house.  I just need a woman, I continue to tell myself, but no woman arrives, as Lisa is probably gone for good, seeing another man most likely.  She’s be the type to have multiple boyfriends.  Maybe I shouldn’t have bought her such an extravagant earing and bracelet set from Macy’s.  And what’s more is that I don’t really mind how much I’ve spent on her.  The money is all gone now, and if she’s just respond to my emails, perhaps it would have been worth it.

It rained all day today, and so our softball game was cancelled, and this, perhaps, is the only good that came of the day – that I didn’t have to play anything, or that there were no activities within sight, except to watch the raindrops fall on Ryckman Avenue where I live.  I even want the company of the young folks next door to me, but they seem to be a group now that wouldn’t exactly welcome me into their fold.  Some people just belong to each other like neighbors and not companions to hang out with.  The loss is mine, really.  I just want a drink right now, and I want it pretty badly.  “This Too Shall Pass” is the only tool in the box left to prevent me from drinking – that and my Higher Power who would see to it that I am properly dealt with when he puts me in prison.  Believe me!  There are higher forces at work right now that will make me suffer if I take a drink.

Harvey Havel is the author of five novels. This past spring, Stories from the Fall of the Empire, his sixth book and his first collection of short stories, was recently released by Publish America. Later this summer, Two Tickets to Memphis, his sixth novel, is forthcoming from Publish America as well. Havel has previously taught Writing at Bergen Community College in Paramus, New Jersey and also at SUNY Albany and the College of St. Rose, both in Albany, New York. Born in Lahore, Pakistan in 1971, Havel now resides full time in Albany, New York.
Loading Comments...