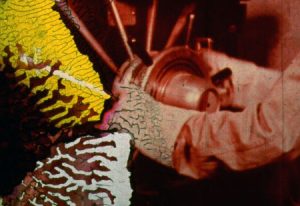 Image from Director Bill Morrison's movie, Spark of Being

Need some help here. I’ve been listening with continuing fascination and awe, frankly, to the album Spark of Being, the soundtrack, performed by Dave Douglas and Keystone, to Bill Morrison’s cinematic adaptation of Frankenstein. DJ Olive’s textures and Gene Lake’s nervy drumming, in particular, create a a sonic approximation of what The Creature may have felt stumbling into its body.  First, does anyone out there in Fogland know where I can find Morrison’s actual film; I’d love to actually own a hard copy, but I’ve been unsuccessful thus far in tracking one down.  Also, I’m teaching a class on Shelley’s Frankenstein in the fall, and I’m interested in anything that the myth has inspired in the way of both pop and high art–anything from Lady Gaga’s monsters to poems, novels, songs, etc…  I would greatly appreciate any comments below.  Thanks.