Ansen Seale was strolling in the alley behind his house one evening when he stumbled across an odd piece of trash. The red and yellow of a McDonald’s hamburger carton had bleached away, leaving only the shadow of the ‘M’ abstracted to black ink. Unsure of what he was seeing, he stopped. “Why,” he wondered, “is there a scrap of Arabic writing on the ground?”

Thus does serendipity collide, sometimes, with subconscious impulses. The iconic curves of a fast-food restaurant’s arches appear as graceful Arabic letters, and a piece of creative work is born. Seale, a photographer and digital artist, turned the find into a digital print. 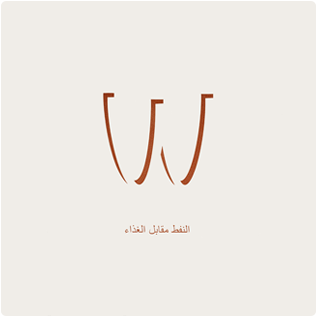 I met with Seale in his San Antonio home earlier this year. A soft-spoken and articulate South Texan, he peers at you through rounded wire rim glasses; his lean frame radiates an intensity of purpose. On one large white wall of his studio – a reconverted outbuilding – five square-foot squares hang, each print offering a different entrance into his world, their diversity reflecting Seale’s wide-ranging interests.

Take the ‘arch’ piece, whose title “Oil for Food” (spelled out in an Arabic phrase at the bottom of the print) is taken from the UN program that aimed to offset the human cost of sanctions against Iraq before the U.S. invasion. The piece delivers an extensive commentary on Western influence and desire in a few spare strokes. Seale points out some of the associations viewers have noted in the print. “There’s ‘oil for blood,’ of course, and even ‘oily food,’” he says. And then there’s that arch, which, here positioned upside-down, can be read as a ‘W,’ an ironic emblem of recent American political history.

In the next print, the entire Old Testament book of Exodus unscrolls in a series of tiny lines, forming a compact square bordered by white space. “Now these are the names of the children of Israel,” I squint to make out, and at the very bottom, “the cloud of the Lord was upon the tabernacle by day and fire by night in the sight of all the house of Israel through all their journeys.” It’s all there, this narrative of liberation from oppressive conditions here liberated from its usual space. 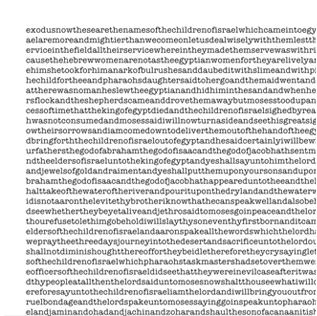 In “Euler’s Numbers”, twenty-eight figures shaped as foothills rise as if before mist-enshrouded mountains. The term is a mathematical one, referring to a set of irrational numbers related to the slope of a tangent line. Here, ranging in height from a quarter inch to several inches (size correlating to mathematical values) their placement suggests a visible world nested within a larger invisible universe. 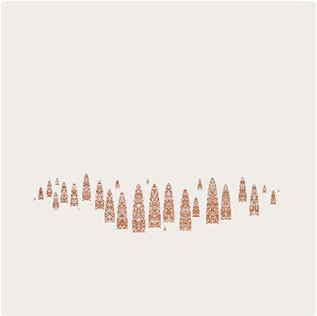 What ties these seemingly disparate ideas together? In each of these prints, levels of scale or perspective shift, and the viewer finds himself wondering at his own proximity to mystery, (even as the cultural aspects continue to resonate.) Seale seems to be asking ‘Are numbers beautiful?’ ‘Do the visual lines of language, on their own, bear a message?’ In other words, can the symbols of modernism – science and religion (and consumerism) – wrested from their usual context, offer the viewer an aesthetic experience?

In establishing a stable grip on our world, context, as they say, is everything. The danger, of course, lies in becoming too comfortable with the way we see. It’s up to the artist to slip a wrench into this process of recognition, wrest things out of order and place them in new light, and Seale does this in abundance in “Bloodlines.”

But perhaps the most surprising thing about the series has to do with the medium. As abstract as these prints may seem, there’s also something visceral about them, not least because of the unusual material used, linking the human body to their themes and giving the series its name. Seale placed himself directly into these prints by using his own blood as medium.

Seale takes pains to downplay the sensational aspects of such a choice. “Blood has a very sturdy chemical composition. There’s such permanence in it,” he goes on. “I was interested in blood’s positive aspects. It carries all this info – who you are, what you ate for breakfast, what your emotions are. I wanted to extend my emotions in this way onto the print. My blood is something uniquely mine. Using it as material also creates a kind of visual exclamation point – to say ‘I mean this!’”

“Native American artists living on the Pecos River in south central Texas used animal blood and bone marrow on their cave paintings, some 4000 to 8000 years ago,” Seale tells me. He’d been photographing those paintings for several years, intrigued. One day in his studio, he accidentally cut himself, spilling blood on a print. Remembering the Pecos glyphs, an idea came to him.

After a nurse friend drew his blood, Seale used a centrifuge to distill the “pigment,” the red blood cells, from it. He then silk-screened the images, squeegeeing the blood/ink through the designs onto archival cotton rag paper. First-time viewers often approach the prints casually, appreciating their aesthetic; learning of the medium, they do a double-take.

Seale says he hopes his work helps to re-amalgamate religion, science, and art, putting them back together in a sympathetic relationship. In this, he takes inspiration from those early Pecos Indians. The shaman, he points out, was artist, priest, and healer, all at once.

“There’s not much difference between us and them. We’re hard-wired the same,” Seale says. “The software is a little different, due to culture. But they’re painting on the wall of their cave, telling their stories, and we are, too.”

But unlike some artists, who complicate the question of cultural cooptation by declaring themselves shamans, Seale doesn’t see himself in this light. “I’m an artist. I’m not so much into the healing or spiritual aspect of what they did. I’m also not into telling people what to think, or how to be, or what the answers are.”

That said, he admits there’s a deep intuitive energy at work in his creative process. “The subconscious plays a huge role. Ideas occur to me, and I act on them before I can think too much about them. Later they begin to make sense.”

My favorite in the series is “Tao Code,” in which the naturalistic aphorisms of Taoism’s primary text, the Tao Te Ching, are translated into bar code information. Laid out like a topographical map, the book’s 81 chapters divide conveniently into a 9 x 9 inch square. After transferring the text into binary code, Seale ran it through software to create the bar code, forming a visual essay at once technological and ancient. 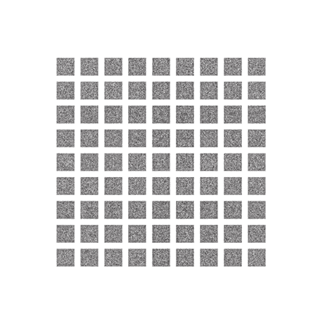 The piece riffs on the dualism of both digital media and philosophy. In other words, the coded information, composed of ones and zeros, strangely echoes the message of the Tao: the duality of all things, being and nonbeing. What we find beautiful in nature – flowers, stars – are actually bundles of numbers and information. And then, at another remove, are empty, form giving way to formlessness. Why not, Seale seems to be asking, perceive the world in these terms?

Seale’s interest in technology and mathematics emerges also in “The Irrational Number Pi to 100,000 Places”, a digital print of (a portion) of pi’s value. It’s a humbling experience – seeing a number printed out to such lengths, and knowing that this is not its end. It’s also remarkable to see Exodus and pi, which would seem otherwise to have nothing in common, juxtaposed. Here they’re surprisingly similar, both prints presenting large amounts of information in soothing, mesmerizing forms, both abstracted and yet also contextual, because the viewer brings his or her own values to the viewing experience. 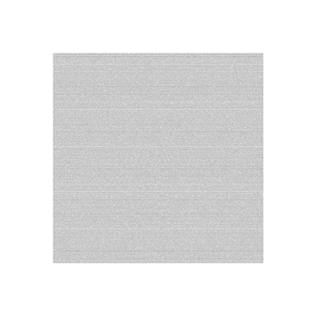 Ansen Seale began his career as a photographer with a more traditional concern for composition and form, shooting textured buildings and landscapes. A few years ago, as part of his commercial photography practice, Seale invented a special slit-scan photographic technique, intended for panoramic website tours, but which he discovered allowed him to examine the passage of time in a unique way, to play with time and motion so that still objects were blurred and moving bodies rendered clearly. This signaled a departure into new creative territory for him.

‘Bloodlines’ seems a logical extension of where he’s been – from playing with the passage of time to experimentation with form and substance, from an interest in the beauty of the ordinary to a tackling of aesthetics within larger themes.

No matter how far he travels from his early photographs, form continues to work as a home base. “As an artist, there are no rules,” Seale muses. “It’s difficult to decide what to do. Freeing, but difficult. That’s why I like the square. It’s very neutral, and stable. You’re free to do whatever within it.”

As for the number-oriented pieces, Seale says, “Numbers, to me, are as interesting as art as they are as mathematics. A friend had a dream in which prime numbers were chasing him down the street. Fantastic! It awoke something in me. What if numbers are real, I thought, what if they have personalities? What if they exist outside our perception of them? I’m taking a layman’s understanding of mathematics, and putting it into a different context, that of art.”

Melding the abstract with the representational, teasing meaning through the door of decontextualization, Ansen Seale’s “Bloodlines” points to what lies beyond ordinary perceptions.

Andy Douglas holds an MFA in Nonfiction Writing from the University of Iowa, where he was the recipient of the Marcus Bach Fellowship for Writing about Religion and Culture. His essays and translations have appeared in Bayou, Mary, New Renaissance Journal, Pisgah Review and Nimrod.