The World of Tomorrow

I recently read The Road by Cormac McCarthy and while immersed in the story of post apocalyptic America, I ran across the photography of Anthony Kurtz. When I looked through this series, I couldn’t believe the similarity to the images that McCarthy was conjuring in my head. Serendipitous that while reading the book I would stumble upon such a perfect compliment to it. If you’re not not familiar with The Road, no worry, Kurtz’s work speaks loudly on it’s own and is well worth exploring. Kurtz captures an America that doesn’t exist .. yet .. and he does it with style.

“One day, oxygen will be a commodity.

In this futuristic portrayal of a world gone wrong, it is unclear what happened. In the first photograph one observes a flow of converging traffic under a stormy sky. In another picture, Manhattan seems deserted. In yet another one, a man holding a baby stands at a gas station, both wearing oxygen masks. What happened? Environmental disasters? War? A world pandemic?”

The World of Tomorrow will be on display in conjunction with some of Kurtz’s other work at Dickerman Prints Gallery in San Francisco. The show titled It All Came So Close to Never Happening, will run from March 10th to April 30th. 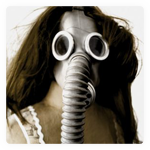 Anthony Kurtz attended the Academy of Art University in San Francisco, where he studied New Media and Graphic Design. He has been published in Photo District News, The Wall Street Journal, Design Taxi, Common Ground Magazine, Travel + Leisure, Entertainment Weekly, and Conde Nast Traveler, among others. His work has been displayed in numerous galleries in the U.S and Europe, including Galerie Acte 2 in Paris and Artworks in San Francisco. He currently resides in San Francisco, California.