“Teach me how to pray,” she says, and gets down on her knees. Becky Sims, a wispy, straw-haired freshman. Eyes blackened with mascara, a wash of rouge painted over blemished skin. You’ve only seen her once before, in the first meeting of your “Mystery of God” course. Now she kneels in front of you, barely a breath away, on the Persian rug that covers your office floor. The resource bookshelf looms at her back, all thick vertical tomes, and for a moment you feel as though the books are prison bars, and you’re trapped in a cell with the girl.

“I want to know the words,” she says, weaving her thin fingers together, holding her clasped hands in front of her chest. She turns those inky eyes toward you. The collar feels stiff at your throat; each cuff a cotton shackle. This isn’t the first time you’ve felt this way.

In seminary you shared a dorm with a ruddy faced boy from Boise: Patrick Brennan. Wistful and shy, the pink in his cheeks like a constant blush, Patrick looked to you for guidance during his first year. You quickly grew fond of him, and began taking him along for hikes through the wooded hills. Marching hither and yon, throwing your arms open to vistas and declaring “This is God’s glory,” you imagined yourself a great teacher. Finally after months of such excursions, you led Patrick to an icy spring, stripped off your clothes, and dove in. He stood ashore, trembling.

“Come in, Patrick. There’s nothing finer.”

Slowly, with eyes cast down at the earth in front of him, Patrick began to remove his clothes. His cardigan, his shirt (freezing up at each button, then willing himself onwards), his undershirt, his belt. When he’d gotten to his briefs, so pale white against the rosy hue of his delicate thighs, he darted a glance at you, and caught the angle of your stare. Face burning crimson, he re-dressed and retreated, leaving you feverish in the cold water. You’d been found out. The swirling current offered no cover from God’s rigid gaze, and Patrick never spoke to you again.

Now, so many years later, Becky Sims kneels before you. Her eyes are shut tight, her hands held together so fervently that white spreads from where her fingers touch. You can see the florid glow rising under her makeup, blooming upon her neck and upper chest. A heat builds in your own cheeks; you grow slightly dizzy; there is a prickling in your loins. This young girl before you, desperate for what you can give. 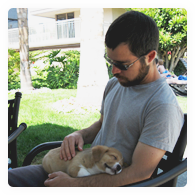 Marcos Soriano has published stories in Quick Fiction, Instant City, NANOfiction, online at Thieves Jargon, and elsewhere. He lives in San Francisco and earns a living as a gardener.