Although familiar characters pop in and out of Charles Baxter’s created world, the stories in his newest collection are foremost linked by thematics—each poses the same question of the protagonists, and in doing so requests the reader participate as well. The stories stand not only as emblems for the single word virtue/vice for which each is named, but they also beg contemplation of the thematic currents running beneath the pages. As one might expect of an author who’s finest essay on the craft elements of writing is called “The Art of Subtext”, these thematics are deeply buried, subtle, often exciting for a reader used to being slapped in the face with ideas over all else. 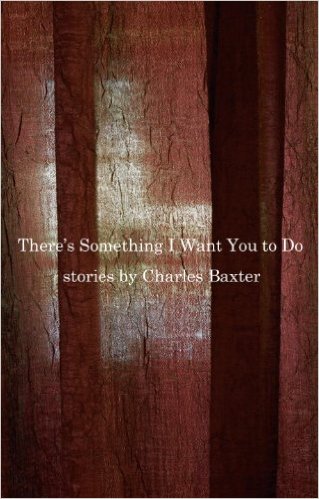 To counterpoint each rat maze he has created, Baxter lets us spend time with the pawns in his game during their mundane, almost boring moments. While that may sound like a slog, Baxter’s command of the everyday experience is exquisite; it’s through familiarity and common experience that his characters move beyond being subjects in a grand examination of faceted morality. In the collection’s lead-off story, “Bravery”, Baxter reserves the first ten pages for a tell-tale history of idling along a couple’s chronicled coming together. The tale of their burgeoning, soon-realized love is not foreign—the two meet in a particularly upper middle class way, an intellectual spark flies, and they spend the next months tangled together in the throes of passion. Baxter is not a stranger to writing about love’s many forms—even devoting a novel to a reimagining of A Midsummer Night’s Dream—and he is unafraid to give us an account of a relatively commonplace happening. The story takes flight only years (and two kids) later when its protagonist, Elijah, succumbs to the mordant banalities of life after the honeymoon period. In order for that change to actually matter, Baxter knows the reader must be familiar with how things were before the fall. An asshole character is hardly interesting anymore; it’s tracing the tiny fissures that caused the break that is most engaging. Elijah is ferocious in his disdain toward his (by all accounts) lovely wife, and it is the reader’s imperative task to understand what could lead a well-adjusted pediatrician to behave so basely. Elijah ultimately only finds solace in a bizarre odyssey which culminates in, you guessed it, an act of bravery that revitalizes him. The idea of his own bravery reignites—rather pathetically—what was between Elijah and his wife, though her acquiescence to the whole ordeal of middle-aged revitalization is questionable, and, in itself, an interesting pivoting point. What Baxter is positing, however, goes much deeper than the bravado that gets Elijah his groove back, as the idea of subjective, self-serving bravery standing in for actual bravery largely looms over the text. Once again, the reader is called in—the good cop to Baxter’s bad—to absolve (or abhor) Elijah for his behavior. It’s a function of Baxter’s setup that the reader can’t remain passive; when a story is called “Bravery”, the reader naturally evaluates how much bravery is actually on display.

So, too, the title of the collection does some heavy lifting. Each story contains the utterance—sometimes straightforward, sometimes merely implied—by one character to another: There’s something I want you to do. I want you to do. This is a pact, and it often does feel a little coerced. The added layer here is the suggestion that these sometimes depraved, sometimes rapturous events are occurring largely on account of the external machinations and desires of other people. This can be considered a matter of predestination—the titular I is God who knows how the existence of his creation will play out, just as the writer who has authored the story ahead of time with an ending already known to him. The reader, in the same position as the you in There’s Something I Want You to Do, is left in the dark, just as the protagonist. When hashed that way, it’s a bit devilish. How much, then, are we responsible when our hands are forced, when our choices are already made for us? Baxter knows it can go one of two ways: good/bad…. vice/virtue. It’s a device that remains interesting—not overstaying its welcome—in the brisk-feeling 240 page collection.

Perhaps to taper the loud issues of determinism the stories bring up, Baxter’s flourishes on a line level are largely understated. In the past, he has been more flayed and more overtly moving, and his past collections have seen greater impact on a piece-by-piece level. (I’m looking to his story “The Disappeared” about burned-out Detroit as his most haunting.) In Something, we settle for tiny affirmations in the form of morsels we can gnaw on before tackling the next quandary, as large as the last. Some readers may feel these quiet turns are not exciting enough to sustain maximum interest over an entire collection, which is valid, as there is most certainly a formula working here. Fortunately, the stories do gain momentum, creating the feeling that there is a larger picture slowly coming into focus. But the feeling is brief, because we know who we are dealing with. There is no satisfactory answer to any of the questions Baxter poses, but we read on, because the writing is good. When Baxter finally draws the curtain back, he flashes some of his most compelling stuff. But here even his subtext is lightly and delicately sketched. The book’s best moments come in forms of lines that hang on for dear life—sentences that seem to dangle from the cliffs of logic and reasoning, only to pull themselves up, finally, transformed and shining with strange, resonating wit. Consider the ending of “Forbearance”, where a word-nauseated translator faces the ghost of the poet she’s been stuck translating:

“‘My dear,’ he said, his voice coming out from eternity. ‘Oh, my dear.’ He opened his mouth and exhaled, and his breath smelled of Catherine’s grave, and then, as Amelia drew back, the grave started to laugh at her.”

Baxter runs the risk of camp with this and other nail-on-the-head lines that pinpoint what it is all about. (A friend of the translator pontificates: “Things are not translating? Sometimes they do not. Sometimes they stubbornly stay what they are.”) However, he gets away with it because of the use of the mundane to get there. “Forbearance” is not about ghosts, or even hitting the wall of limitations; it’s about the frustration with one’s profession, the inability to do that which you are paid (yeah, sure, sometimes called) to do. It’s far from feeling pat or the least bit predictable because of the author’s focus on the minutiae, the moment, and most importantly, his refusal to spoon feed the character’s outcomes to the titular questions. Most of the stories don’t resolve; they play footsie with their logical endings, but are ultimately disappeared before midnight. Baxter’s always been a bastard for that. I found that teaching his “The Cousins” in my undergraduate creative writing classes brought bile to students’ throats. “The Cousins” is taken from Gryphon and collected in Best American Short Stories 2010. After a twenty page spiral which involves the mysterious death of his cousin and a close affair with his widow, a broken man stands at the doorstep of his house, wanting to be let inside. He sees his wife inside doing chores; he rings the doorbell, knocks. She does not acknowledge him. The story ends. That was the story that got me hooked on Baxter, and I’ve spent hours in the classroom analyzing the ending. I try to get the students to see that it’s a stellar example of an anti-ending, a great illustration of the concept in Baxter’s craft essay, “Against Epiphany”, in which he basically argues that Flannery O’Connor hogged all the good story endings for herself, so much so that it’s become trite and gauche to try to shoehorn something where a character learns anything significant. In Intro to Creative Writing, you’ll hear that a character must change in order to have a story. If a writer progresses beyond that course—and if her instructor is any good—she’ll be led in the other direction, told that real life doesn’t truly involve the A-ha moments, that epiphanies are didactic. Watch the 2002 film Adaptation to see that struggle in its sweatiest—Nick Cage’s Charlie Kaufman just wants to make a movie about flowers. Baxter just wants to render human behavior in his own way. I rarely find him judging. As the realest realist writer, his utmost goal is striving for the moment of communion between character and reader, the fusion point of the two where we go, “Ah, I have been there” or, “I fear being there,” or at the very least, “I can picture what it would be like there.”

It’s important to note that Baxter is immersed in the history of the form. As referenced, his collection of essays on the craft of fiction, Burning Down the House, has become a staple of the creative writing classroom. It’s also of note that Baxter edited an edition of the archetypal linked collection of stories, Sherwood Anderson’s Winesburg, Ohio. It’s true that There’s Something I Want You to Do owes much to Anderson’s peppering of morality and existential questions, but Baxter respectfully treads on the outskirts of that tradition, always observing, and never rehashing. It’s easy to picture, in some decades, a portion of Baxter’s work being heralded as highly as Anderson’s or maybe Cheever’s for their dedication to inner workings that plague ordinary characters. Let’s hope Baxter has something more for us to do sometime soon.

Michael McDermit is a writer and musician living in Los Angeles. He received his MFA from the University of Oregon, where he also served as the writing instructor for the Oregon Young Scholars’ Program. He is a contributing member of the My Idea of Fun artist collective that is based out of his flood-famous hometown of Johnstown, Pennsylvania, and currently teaches writing to underserved college students in South L.A..
Loading Comments...