In the summer of 2014, Claudia Emerson was on faculty at the Sewanee Writers’ Conference. I attended that year, having just received my MFA, ecstatic and honored that I would be taking part in her poetry workshop. Our group met twice weekly, and if I remember correctly, she gave the inaugural reading at the Conference that year, speaking from the lectern of her love of fire, the beauty of the ritual burn. In workshop, she spoke with a fierce compassion, an awesome precision, and despite her declining health, she was entirely engaged in the work of guiding, advising, and pushing us to engage with poetry at its deeper levels. Indeed, she was, and still is, a force, one that made an almost inexplicably strong impression on me in the short time I spent in her presence. 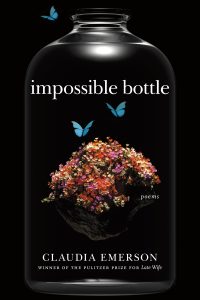 Little surprise, then, that her final collection, Impossible Bottle, is one of primal power and beauty, a distillation of nothing less than a life into page after page of music impossibly clear, which is not to say, easy. The poems here gaze unflinchingly at a world of incomprehensible pain in the face of inevitable loss. The true wonder of this collection, then, is what a joy it is to read, how easily the music builds and flows from one line to the next. If the poet’s task, as some have said, is to transmute the thing, the world, into something other and more beautiful, then Claudia Emerson was a poet of unmatched excllence. The really extraordinary part is that she does not simply metaphorize or sleight-of-hand what is into something we would rather behold. She shows us what is, and tell us gently, This too is beautiful.

The title of the book, Impossible Bottle, comes from that of the first poem of the book’s final section, in which we are presented with the image of a ship that’s been placed inside of a green glass bottle, one of those gift-shop curios. Here, however, it becomes the guiding metaphor of our reading, of the impossible blessing of life, of beauty and the way it sometimes must safeguard us against that very life, certainly of the power of poetry itself to preserve, but finally as a “lens”, a “thick, dimensioned” way of seeing the world in all of its luminous, ephemeral detail.

The book is divided into four sections, each of which could be read as a kind of preparation stage, a reckoning (as, of course, all poetry is) with finality, mortality, “first things.” So the two, the beginning and the end, the poles of the poet’s life, bend to meet here in a sort of emotional, temporal swirl, carrying the reader from past to present and back again. From the outset, we are solidly grounded within the speaker’s interior world, the poem “Metastasis: Intercession” providing a sort of play-by-play of her changing thoughts, the conspicuous lack of punctuation underscoring their fluidity, and the fluidity of the self:

a burn slow     miraculous such green     there
there you are

The frequent turn to this mode of self-address (deixis) acts as an attempt to locate oneself precisely in space or time: “there you are,” and, “you are the exam…you are the text,” and, “I am not this, not here, this time”—they act as a simultaneous slippage and leverage on a suddenly untenable world, or even one’s understanding of the body and identity due to a completely new and merciless force, namely, disease.

The sheer beauty of this sequence of poems, in particular, cannot be stressed enough, and I found myself in reading them closest to the actual being of the speaker, to her world, the “perilous air” she inhabits. If they can be considered parts of larger sequence, they are a network sequence, not a lineal, traditional one. This is fitting, considering the many ways that our current digital world upsets our traditional notions of the lineal sequential world. I used the metaphor of the “swirl” above to describe the way in which Emerson suspends time and our expectation of what-comes-next through a certain lyrical mobility, a freedom to range through time itself which only a poet as accomplished as Emerson could do (In this, I am reminded of Schnackenberg, particularly). I think the image of the network or web is more accurate, however. Indeed, the poet presents us with this very image in “Metastasis: Web.”

no mistake      this web’s expanse
near invisible

the web become larder     the spider
grocer     its lovely apron

approve      somehow of the commerce
as though     agreed to

In the final section of this collection, we find Emerson returning to her beginnings. We are taken on a journey of sorts through a past of sometimes startling violence, grief, and ultimately hope, as if to climb the “golden ladder of memory”, as one poet has phrased it. Many of these poems seems to center on the mother figure, though it is difficult to tell sometimes, the subject often being simply “she”: “She chooses the known wild, tired now, the plots / formulaic, and she…” or, “She knows / it for what it is only when it stops, with shocked / clarity, the way / nothing alive ever has.” The frequent use of couplets, the attenuated second line, creates a sense-unit complete in and of itself, so that the whole of the poem becomes a web or network of disparate and yet necessarily interconnected emotional charges, as if the neural firings of the mind had been mapped out for us on the blank of the page.

So often we find Claudia Emerson our interpreter or guide through a series of bewildering or simply unintelligible situations, a sort of Virgil for us, to reckon true the desolations and ecstasies of our lives, be they past or still passing. That her rendering of the world is so accurate, so clear-eyed, is the very reason why it is such a joy to read. It appears to us as luminous, because it is accurately translated. This is especially the case in the second section, “Participant Observations,” in which Emerson presents scene after heartbreaking scene of hospital life, convalescing in the perfect clarity that common suffering affords.

There is Leonard, a no-nonsense mechanic who complains of the new guy at work, or the old woman who refuses to speak to the girl who has come to visit her, and instead stares with an “iron-steady gaze, the cataracts / small blinds she has early drawn down, / defiant, and she stands behind having done it.” Then there are the more personal moments, the small enjoyments of patient existence when our proximity to the poet seems reduced to almost nothing, as in sections 1 (in which we see a return to a familiar theme: “yes, yes, this is me.“), 2, 5, 6, 8, 11, and 12. Here, we understand most fully the awful beauty that is the heart of Impossible Bottle, the beauty of a world in the face of its own eventual conclusion, or new beginning: “the body of light that swings from the rafters.”

Daniel DeVaughn is the executive editor of the arts journal Cumulus, as well as the co-curator of the The Daily Dive, an online forum for the exchange of literature, music and visual art. He holds an MFA from the University of Oregon, and has received fellowships from Sewanee, the Norman Mailer Writer’s Workshop, and the Vermont College of the Fine Arts. His poems have most recently appeared in The Nashville Review and Fogged Clarity.
Loading Comments...