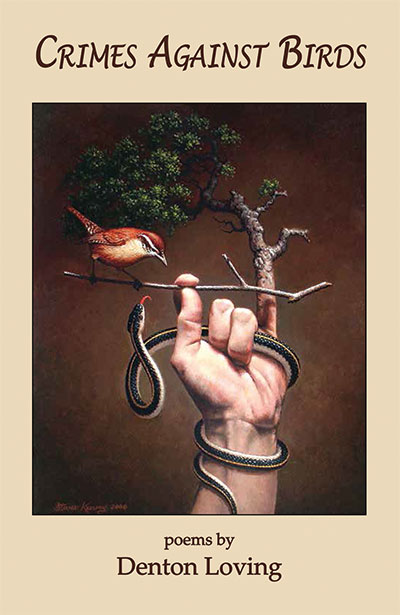 The pastoral imagination that illuminates Denton Loving’s Crimes Against Birds combines close observations of the natural landscape, plainspoken meditations, and a tone of simple and reverent sincerity. A poem like “Blessing of the Bees,” in which the speaker addresses his beehive, is characteristic of Loving’s generosity and his ability to feel the kinship that binds humans to place and nature:

This poem, like many in the collection, recognizes a uniquely human responsibility to cultivate kindness in our interactions with the world. “Blessing of the Bees” continues:

May the buzz from your hive remind me
always of your work. Let there be honey for us all.
Be good to me and remind me to be good to you.

Throughout Crimes Against Birds the narrator’s consciousness is guided by an intimate connection between humans and the natural world. Throughout the diverse scenes in which the poems occur – from pizza pub, to horse cemetery, to McDonald’s parking lot – natural imagery and figuration inform and direct the consciousness of the speaker, participating in each poem’s movement toward its surmise.

Poems such as “Blessing of the Bees” characterize the affirming and lyrically secure expression of Denton Loving’s pastoral imagination. Yet, there is a shadow side to the collection, a more troubled consciousness that complicates the sentiment and sincerity of such poems. Poems like “Horse Cemetery,” “Eleanor,” and “Missing” subvert the expectations of the pastoral scene. In these poems the pastoral’s traditional locus amoenus is unavailable and perhaps irretrievable – corrupted by what Wallace Stevens described as the pressures of reality.

In “Missing,” the speaker of the poem describes the site where a calf has died, where all that’s left is “a rib cage, raw and picked / away by dogs or coyotes. The head is completely gone …” Likewise, in “Eleanor” the pastoral moment is again thwarted by the hard reality of a dying calf; the poem begins, “Twice I chased buzzards from her lifeless body…” In “Horse Cemetery” the poet describes a spot of land “on the far side of my family’s farm, / across the pasture and in the deepest stretch of western woods.” Once a horse cemetery, now the land is a shaded spot for the cows; the poem continues: “It is shady and cool in this gully of hickories and oaks, / hemlocks and pines.” And this is the closest we get to pastoral ease. The next sentence undoes the moment of leisure:

…We drag her
to the wood’s edge, cover her with branches
and stones, form an old-fashioned cairn. The wood
decomposes with the body. The stones roll away.

Again and again, these bucolics are undermined by a pressure of reality that obstructs the realization of the longed-for locus amoenus – site of rustic song and lyric insight. Moments such as these present the most complicated and subtle challenge of Loving’s poems. By calling attention to the unavailability of the pastoral site in poems such as “Missing,” “Eleanor,” and “Horse Cemetery,” Loving establishes a pervasive sense of irony that upsets the pastoral mood of the collection. How do we trust poems such as “Blessing the Bees” when we recognize the literal unavailability of the pastoral scene itself?

Denton Loving’s collection offers no easy solution to this paradox. The poems in Crimes Against Birds enlarge our capacity to experience reciprocity with the natural world that sustains us; however, they also require us to face the limitations of the pastoral scene. As a result, the truths derived from pastoral language, image, and figure seem more chimerical – as much a function of language as a function of landscape. The unique labor of the neat-herd in Crimes Against Birds is to reimagine the pastoral scene, recognizing both its contemporary limitations and possibilities.

In a cultural and historic moment where the pressure of reality seems to infiltrate all of our dreaming spaces, Crimes Against Birds works to recapture lost territory. Denton Loving’s collection exerts its own pressure of imagination toward the reclamation of the pastoral’s way of knowing. And if the traditional locus amoenus is unavailable for the speaker in these poems, all the better; he will let the pastoral imagination become the unique signature of his varied observations.