How does a woman navigate between the often ignored undercurrent of gender bias and the fractious Feminist movements seeking recognition and equality? [This] series represents the female figure as an agent of revolt in the form of resolute warriors and in the context of the formal society portrait. The identity of the figure(s) is denied by wraps, bonnets and bound faces. The pattern material and textual narrative disrupt the sense of a specific time period. This ambiguity admits first wave feminists and today’s ‘everywoman’ into the visual conversation. 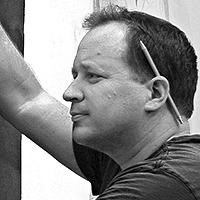 John Westmark is an American artist, with a BFA from the Kansas City Art Institute and an MFA from the University of Florida. His paintings have recently been bought by the Council on Foreign Relations in Washington, D.C., and the Frederick R. Weisman Foundation in Los Angeles, CA.