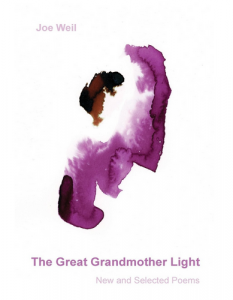 Joe Weil is an assistant professor of poetry and fiction at Binghamton University at both the graduate and undergraduate levels. In 2013, NYQ Books published Weil’s New and Selected Poems, The Great Grandmother Light. Its poems span over 3 decades and contain a breadth of compassion too little seen in the American poetry landscape. Where so many strive to be simply clever or even insightful, Weil’s poetry addresses us with the force of a confrontation. He is as equally willing to warn us that, “The world is not particular in whom it chooses / to slaughter” (“For Jordan, a Kid from Paterson Who Visited My House”) as he is to console us that “God will count many things against us, but he will not count the lies of mercy we tell” (“Chicken Fat”).

Weil is a spiritual poet, a deeply wounded poet: “I come to bless the weeds / to sing the wound” (“A Dream of Elephants”), or again he writes:

What heals
is not the closing of wounds,
but their full ripe opening
until I am a river in free flow.

Though he grew up and worked the factories of his home town in Elizabeth and a number of his poems characterize the long-suffering life of such factory workers, he is really a poetic bodhisattva, someone who refuses to enter enlightenment until all beings have entered enlightenment. Theirs is a life devoted to the awakening of all mankind. I say this because Weil is, at heart, an ecstatic poet who cannot close his eyes to the suffering around him. His poetry strives towards transcendence but does not always reach it or outright refuses it. So when it is reached, it is deeply felt because so hard won. Therefore he ends an early poem saying:

. . . the sea
which wants only to make you weightless in its arms,
wants only what you want, and you refuse.

The sea in poetic tradition is the image of the creative primal source and here is also identified with the transcendent and spiritual. Weil reaches out for the eternal silences and insights, the hidden beauty and love, rooted in proddings from the earliest days:

… if you
have enough time, my father said, enough time to swallow
your own spit, you might hear the universe speaking to
you—its endless patter, its voice in the stones, a great rock
along 81 south whose silence is song

But as I say, he cannot close his eyes to the suffering around him, the simple pains of human drudgery and the difficulties of surviving from day to day. So his ecstatic root mixes with this suffering and gives birth to some poems that are incredible love poems for our rough lives. Not only love poems for his wife and daughter, but for his father, his mother, a co-worker lying on the ground with a broken leg. His poem “The First Time I Got Up Early,” is really a love poem to his father. He comes home from work “machine grease in my pores, / stinking of coolant mist and sweat,” to sit and have a beer with his father who lost his larynx to cancer. The poem brings father and son together in this moment of recognizing the drudgery of just making it through the day, connected by the father belching out, “I’m sorry.” No explanation, but you know what it’s for, that apology: this entrance into toil and a life of long, hard work. The father gets too drunk to go upstairs to bed on his own, so:

. . . I helped him up the stairs,
took his work shoes off, cleaned the snot from his throat hole,
covered him with a blanket. This was love. I meant it,
silent, and knowing it could kill me. I took my time.

That kind of love, the kind that doesn’t fear getting dirty, in fact, knows it’s the only way to really love, is behind every Weil poem. It is the source of inspiration. As one of my personal favorite Weil poems says:

Or, again, one sees these two merging (his ecstatic reaching and his suffering heart) almost seamlessly in a line like:

The winos rise as beautiful as deer.

(“Morning at the Elizabeth Arch”)

Or it becomes a social commentary from the perspective of spiritual necessity. In Dark Night of the Soul, St. John of the Cross spoke of the soul’s aridity, this condition to spiritual awakening. The poet Thomas Traherne characterized it by saying that the “soul is pure capacity.” Weil, a poet of 21st century America, who is aware and wounded by its materialistic consumer culture instead writes:

But suppose I write:

“Lack is the necessity of being.”

The nation will turn against me.

The earth is lost, lost to some idea
for which the slaughter of children is necessary.

Coleridge said, “Deep thinking is attainable only to a man of deep feeling.” In The Great Grandmother Light, you will find many poems of deep thinking precisely because they are deeply felt and articulated in language that is powerfully immediate.

The collection concludes with a love poem for his daughter in which he says:

I want the love I feel for my daughter to be like the art work done by the artisans in the eves of Chartres. They did their best carvings where no one but God would ever see them.

Let that not be the history of this book but rather that which Jesus Christ said to the apostles, “Neither do men light a candle, and put it under a bushel, but on a candlestick; and it giveth light unto all that are in the house” (Matthew 5:15). Let this book give light to all that are in the house, for this is a kind of poetry that in its clarity addresses so much that is lacking in our culture. The compassion found in The Great Grandmother Light is healing. Through each word and turn of phrase, one feels the poet saying in so many ways:

And I love you
love you
through the doorway
of every wound.

Michael T. Young’s fourth collection, The Beautiful Moment of Being Lost, was published by Poets Wear Prada. His chapbook, Living in the Counterpoint (Finishing Line Press), received the 2014 Jean Pedrick Chapbook Award. He received a fellowship from the New Jersey State Council on the Arts and the Chaffin Poetry Award. His work has appeared in numerous print and online journals including Edison Poetry Review, Fogged Clarity, Off the Coast, The Potomac Review, and The Raintown Review. His work also appears in the anthologies Phoenix Rising, Chance of a Ghost, In the Black/In the Red and is forthcoming in Rabbit Ears: TV Poems. He lives with his wife and children in Jersey City, New Jersey.
Loading Comments...