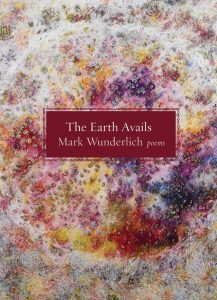 The Earth Avails is Mark Wunderlich’s third book. One approaches a new book by Wunderlich with a bit of heightened attention and expectation given that his first book, The Anchorage, won the Lambda Literary Award of its season and that Wunderlich is the recipient of fellowships from the National Endowment for the Arts. That first book was followed by Involuntary Servitude, perhaps a harbinger of the new book that has come.

The Earth Avails is a book with higher artistic conceit than a collection that requires little more from the reader than the tools of elemental intuition, curiosity, and a level of maturity. It seems some years ago while visiting his family home in Wisconsin, Wunderlich came across a small book of prayers, written in German and published in 1876 in St. Louis. It is not everyday that one opens a book of poetry based in part on nineteenth century prayers and folk religious documents, though the notion of a spell to ward off misfortune and to assist a traveler on the trail or at the crossroads is in tune, even welcomed, in the present zeitgeist. Such is The Earth Avails.

Neither the subject nor the language is highfalutin… yet, lending to the mystical, the simplicity of the poems avail the reader most willing to move around the poems with willingness. A thoughtful reader willing to keep going back in may sense Rumi, English meter, and even Anglo-Saxon conceits of weary travel, wandering, or the confused bird just fluttering in from a storm outside the mead hall—the bird that just as quickly flutters back out. One’s flickering time in the mead hall is brief and can be confusing.

You, looking down upon us from your canopy of air, to you
I commend my body and my brain, and that of my beloveds.

all that I own–stonepile of a house, tilting barn, garden and beloved beasts,
orchards, woods, my sweet furred animals,

the white mare and the bridled gelding,
the goats with their worldly eyes,

my reading and teaching from the books I read––
let it all rest in your giant hand.

The poems are peppered with creatures: a cat, an albino deer, a coyote with mange, a ram, breeding pairs of mountain lions. The locals are domestic, farm, and wilderness. There are even quick cuts to the modern wilderness:

Someone burned down the Chicken Valley strip club,
where the girl who won the state cross-county meet

ended up pole dancing, and where her driver’s ed teacher
and basketball coach went to watch her on Friday nights.

The Road Dogs host a car shoot to raise money
for a cancerous friend: put a car in neutral,

roll it down a hill, and for $10 you get to shoot the car
as many times as you can. Helps if you’re drunk.

Wunderlich’s book braids along. Like its author, the lines are reverent and mindful. Working from an archaic cosmology, Wunderlich is aware of the risks of cliches. The poems from a lesser poet could lapse into predictability, lend to the quaint, maudlin, or gothic. But Wunderlich is a first-rate poet. He risks and pulls off elevation without accommodation:

Oh Tenderhearted, O Kindhearted,
you who have spared us from eternal servitude,

by torturing and killing your only child––
we know what you can do.

presses his stinking hoof against our neck,
the tyrant who supervises a petty bureaucracy

rich with oil and other filth, covers his sow-bride’s
fat Bahamas-tanned paw with a crust of diamonds.

In one of the most passionate poems in the collection, the speaker “is” a sheep being transported by boat. He is mindful of his destiny of one day being a lamb of sacrifice:

I beg you, push up my chin with your thumb

and press your bearded cheek to mine…
I have forsworn all the others, feel you

tightening me to your large thighs,
nothing left to keep us apart.

I am your little ram,
burying his muzzle in thick grass of your pasture,

folded by you at night, herded by day,
a dedicated dog nipping at my hocks.

across my wooly throat.
Do it with love, without regret.

(“Prayer for a Journey By Sea”)

The intricacies of the world astound.