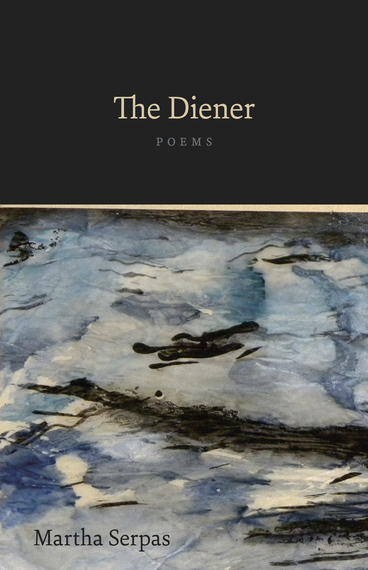 I was camping at Red Rock Canyon outside of Las Vegas when I read Martha Serpas’ new collection, The Diener. One day, while hiking beneath the sandstone walls at Willow Springs, I noticed through a thicket of desert willow and rabbitbrush a petroglyph staring back from what seemed another world. The petroglyph was on my mind as I read the opening lines of the title poem that begins:

We hated the early anatomists
for showing us how fragile we are,
how God’s image is composite: …

Serpas, too, shows how fragile we are. Her poems present a consciousness struggling to make meaning from the chaotic and overwhelming flux of day-to-day experience – both the mundane and the momentous. One striking feature of The Diener is that each poem renders consciousness from within that flux. These are poems of orientation, as opposed to perspective.

Perspective is rooted in sight, in looking. From the Latin per (through) and specere (look at), perspective denotes a science of optics that separates the looker from the object seen, placing the looker behind the lens so to speak. To approach a diversity of experience through perspective is to cloak oneself in a degree of aloofness, to remain always at the slight remove of objectivity. Orientation, on the other hand, is participatory. The initial poem in The Diener is an invitation to the reader to leave the gestalt of perspective for the participatory and grounded poetics of orientation:

… What we make, let’s make old
instead, older than the first tool,
which smelled much like the body –
the first blacksmith must have thought –
not quite like displaced blood, but blood at home
in its place among other parts in their places, …

Throughout the varied physical and emotional topography of The Diener, Serpas reveals a consciousness wholly immersed in its surround: the marshes, the bay, the Gulf; the hospital trauma ward with its hard edges of emotional terrain; and in everyday life that unfolds near the tideland – at Starbucks, at Walmart, beneath the Carmen Kief Bridge.

Sometimes this kind of immersion can be devastating. In “Arrow Boy”, for instance, we find the poet in the hospital trauma ward. The situation she must confront is heartbreaking: a child will die an absurd death for swinging an arrow from a string. The poem moves carefully as it searches for understanding. A quietness suffuses its tone and pacing. “They [the boy’s parents] think someone is here,” Serpas writes, “that something / will happen, but she has arrived / to bring the nothing happening to the something / that is.” The poem charts its physical, emotional, and meditative space through a series of clear, declarative statements. In doing so, the poem creates a living environment within which the consciousness of the poet works to make meaning. And meaning, it seems, nudges from just beyond the straightforward syntax and structure of the poem.

A poem like “Loose Ice”, on the other hand, is more playful. Line breaks, loose accentual meter, and internal rhymes all work to develop the poem’s delight. The scene is a gas station on a day so hot and humid that “the air is a challenge to move through.” Someone is loading a cooler with beer and ice, and the poem relishes in the description that itself becomes a relief from the sun and the heat: “… First a layer / of loose ice, then a six-pack, / another soupy layer, and so on / till the chest snaps shut…” Immersed in the scene, Serpas is able to recognize and articulate through the poem’s structure and language, the beauty of this seemingly mundane observation. The simile that closes the poem goes on to register the moment’s meditative and even metaphysical significance.

“Loose Ice” and “Arrow Boy” display how language, as Serpas writes in the poem “Hirudo Medicinalis,” “seams the ordinary.” These are poems of this world, and they handle their subjects with delicacy and compassion. Language becomes the “…blood at home / in its place among other parts in their places,” allowing the parts to become the composite.

What is the nature of that composite, though, that language that “seams the ordinary”? I think that The Diener leaves us to reflect on the deeper, less fragile kind of knowing that circulates throughout the collection.

What stares back from the petroglyph at Red Rock Canyon? Even though the world that created those symbols has disappeared, something persists at the edges that gestures toward the deep that surrounds us – that we cannot see, but might hear like the Gulf in the poem “Ten Fathom Ledge” that “is alive, / playing its chords, humming its undertow.”