Dean Kostos’ latest collection, This is Not a Skyscraper, was selected by Mark Doty for Red Hen Press’s prestigious 2013 Benjamin Saltman Award. The cover, featuring a blurred photo of Midtown Manhattan’s Radiator Building, announces this as a New York book, and while it’s true that many poems are set at quintessentially New York locations—Bryant Park, a downtown express train, a Russian barbershop, Union Square, the streets of Chelsea, and (perhaps most memorably) the Coney Island Freak Show—one needn’t be familiar with finer points of New York geography and culture to appreciate Kostos’s moving and insightful poems. 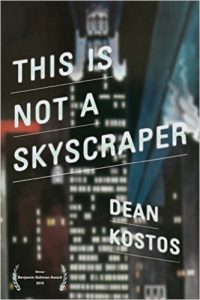 The collection opens forcefully with “Amadou Diallo’s Ghost Reminisces”—a stark reminder that the murder of young black men at the hands of the NYPD is not a new phenomenon, recalling as it does the 1999 shooting death of an unarmed West African immigrant in the Bronx by several police officers. The poem is written in unrhymed quatrains, and while many appear tightly contained and box-like on the page, their symmetry is regularly interrupted by stray words or phrases that break away from the tight weave of the four-line stanza structure:

“Here—my hands!”          I thrust them up
to the crescent moon
my palms’ pages waiting
to be inscribed.

Much like Diallo’s day—which began with him selling “more than my quota of gloves, scarves /& key chains”— the routine of the poem is violently disrupted, a desperate gesture which breaks through the order of form as if to suggest that this kind of atrocity cannot be contained within—or understood by—traditional methods of knowing and organization.

Though it begins on this somber note, This is Not a Skyscraper presents a broad range of tones. As a counterpoint, consider the subdued sweetness of “Subway Silk,” several poems in, in which the speaker, “doz[ing] /lightly on the /express train from Ninety- /Sixth to Seventy-Second Street” hears “a cool /whispering,” feels a “hot breath trill /over /my limbs, /abdomen, chest, /eyelids” and soon discovers

the source
of the chafe: the rubbing of two
nylon

backpacks.
Two people one
a woman, one a man—
both unaware their backs are
touching.

The impersonal, perhaps accidental, gentleness of this moment provides a compelling contrast to the brutality of the Diallo murder.

In general, one of the most compelling aspects of Kostos’s poetry is its ability to sneak form onto the reader. Even a form that tends, by its very nature, to announce itself with trumpets—the pantoum, for example, or the villanelle—gets its volume turned way down in Kostos’s hands. Take, for instance, “Bronze,” a pantoum about MoMA’s Greek and Roman galleries—

His veined hand reaches out to you.
Encased in a verdigris husk,
this man cannot trudge
through battlefields & agoras, brothels & temples.

Kostos simultaneously works with and against form here. The second line of the first stanza (“Encased in a verdigris husk”) is repeated in the first line of the second stanza—as the pantoum demands—but not exactly (“Encased in verdigris damask”). The change of end word—“husk” to “damask”—adds variety while at the same time remaining sonically similar, thus creating a pleasing riff on the established theme.

Kostos’s adroit manipulations of form are also well-represented in a series of poems inspired by various performers at the Coney Island Sideshow. In “Sword Swallower,” he deploys a subtle terza rima—“Wearing torn peek-a-boo /lingerie, she collapses (from passion?) /into a heart-shaped couch, swords stabbing every /which way—a pain cushion.” The slant rhyme creates an interesting linguistic link between sexual desire (“passion”) and an object that can be associated with the sexual act (“cushion”), their association cemented by the romantic “hearts” and phallic “swords” in the intervening line.

The problem is how to name it—
clinical term, slang, or symbol? Be bold or inhibit

yourself? Is it a silky, ring-necked dove on a nest of two
eggs or Plath’s less romantic view?

I stuffed my eyes
with you till climax, then clicked off
the website. Your flesh-&-blood self

lived on in my Chelsea neighborhood.
I spotted you dining by the window
of a restaurant & gawped

as if I owned you, having craved
devoutly.

Here, the use of the tercet heightens the tone of reverence while Kostos’s decision to eschew rhyme suggests a sort of plain-spokenness, an unadorned, confessional stance.

Even at its most formal, Kostos’s poetry feels personal, human. And at its most playful, its most unfettered, Kostos’s poetry pays close attention to craft. Like New York itself, with its carefully plotted grid of streets hosting the chaos of millions of comers and goers, This is Not a Skyscraper reminds us of the rich complexities that often exist within order.

Charlie Bondhus‘s second poetry book, All the Heat We Could Carry, won Main Street Rag’s Annual Poetry Book Award for 2013 and the 2014 Thom Gunn Award in Gay Poetry. His poems have appeared in Poetry, The Missouri Review, Columbia Journal, The Bellevue Literary Review, Copper Nickel, The Gay & Lesbian Review, The Alabama Literary Review, and Cold Mountain Review, among others. He holds an MFA in creative writing from Goddard College and a Ph.D. in literature from the University of Massachusetts, Amherst. He teaches at Raritan Valley Community College in New Jersey, and is the Poetry Editor at The Good Men Project.
Loading Comments...