Half of Fortino Sámano (The Overflowing of the Poem) is a series of thirty-nine untitled poems by French poet Virginie Lalucq. The French original faces the English translation, a collaboration provided by Sylvain Gallais and Cynthia Hogue. 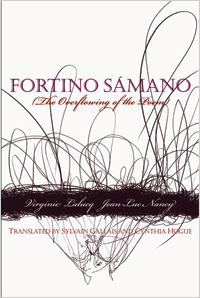 Lalucq’s poem series is in response to a 1916 photograph made by Augustín Victor Casasola during the Mexican Revolution. In the photograph, Fortino Sámano, a dapper Zapatista lieutenant and counterfeiter, stands between a large stone wall and a firing squad moments before his execution. He smokes his final cigar and appears to stare nonchalantly into his situation. (It was reported that he himself gave the order to fire.) It is the only known photograph of Sámano. Casasola, ahead, would also become a partial founder of the Mexican Association of Press.

To see Casasola’s remarkable photograph of Sámano, one will have to look elsewhere as it is not reproduced in this book. Casasola’s depiction is “transmitted” into the Lalucq poem series: 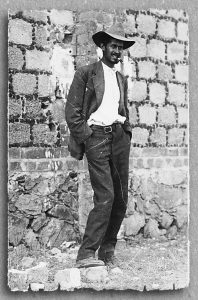 (third poem in the series)

The poems “transmit” the event in small reconfiguring images: the dot-lined rock wall, smoke from Sámano’s cigar mingles with that from the rifles of the federal troops. The poem explores endings and beginnings, light versus dark, presence and absence, historic and mythic time …and simultaneity, originality and translation, art and commentary.

I can slide along the wall, I can count the
bricks., I can. I can ask myself how much
time this will take. I can tell myself that this
will take the time it takes….
(thirty-fourth poem in the series)

Here is the sixth poem in the series, in full:

Meaning is fleeting; it glimmers. It is neutralized… and collaboratively compiled.

The second half of this book, “The Overflowing of the Poem,” is a series of poetic commentaries by celebrated French continental philosopher Jean-Luc Nancy. It is “a philosophical contemplation of fragments of Lalucq’s poem series. Lalucq investigates how the photographic image resists poetic appropriation, just as Nancy explores how the poem resists philosophical explication. Nancy’s section thus contemplates both the poem and Poetry.” Nancy is neither theoretic nor cryptic. He waxes poetically; philosophically:

Fortino the motionless man in front of the wall of execution is unmoving-in-motion
because he returns to his place, the place of his natural and familiar proximity, death,
dried blood, dispelled smoke. He returns to this faraway place… he is transformed into
a bouquet of flowers, in the analog to being. Cut flowers, cuttings, which gently
absolutely allow their names to shift, which are images, one might say fairways
springing up among the words… Virginie may not know all that, but she does not need
to, to be genuinely herself, in person, the widow-writing of Fortino, and these fragile
flowers near his executed body.

Here is another sampling of Nancy’s commentaries:

…There was no course to take. You noticed it. All that it did was to overflow,
without overflowing into some estuary. Philosophy always reaches the ocean,
weighs ink and is lost on the horizon. The poem brings the horizon close to the
mouth of the river, and there opens and closes its own mouth. One does not
leave the planetary earth. One swallows the water, all the waters of Fortino.

The introduction of the book itself states:

Fortino Sámano (Les débordements du poéme) is an interdisciplinary dialogue among
poetry, art, and philosophy, at once innovative and written with an eye to classic
aesthetic tradition (most particularly, the history of the visual Image as icon)….

There’s no schism between the two sections, but interaction. It’s about a trans-mission,
a trans-position or an exchange of “knowledges.” The two sections are distinct and
intertwined.

The book concludes with a translators’ afterwords, a brief note about some issues central to the translating process.

Fortino Sámano (The Overflowing of the Poem) is a collaboration of four living artists. It is a terrific book to take slow, in little bites; to come back to, to repass over small things again and again. It is a book that asks the reader to observe, to think. . . to take part in the collaboration.

Scott Hightower, a native of Texas, is the author of five books of poetry, including Hontanares, an English/Spanish bi-lingual collection with Spanish translator Natalia Cabajosa. In 2008, Hightower’s translations garnered him a Barnstone Translation Prize. He lives and works in New York, and sojourns in Spain.
Loading Comments...