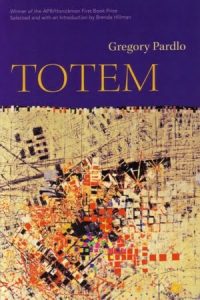 Gregory Pardlo’s thinking has been referred to as “luxuriant” and “discursive.” Totem, his first book, like all first books of a poet, unfolds from the experience of inhabiting and witnessing one’s world and is a dissection of identity. All good writing rises from some form of direct observation.

Pardlo’s poetry is particularly interesting for several reasons. One, he is as acutely intelligent as he is observant. Intelligent, discursive poetry runs some grave risks as it raises the bar on the readers’ willingness to come to the full throttle of cohesive poetic insight. And two, identity is poly-valent and, at times, even fluid. Pardlo accommodates many roles: man, husband, father, child, brother, teacher, scholar, artist (published and celebrated poet), responsible citizen, suburbanite, social visionary, activist, “post-Jim-Crow Black American.” He understands the different volitions of action and the mingling of identities. Pardlo the poet is artfully after essence:

…Accordingly, among actors, fathers
encouraged the mingling of identity and act by raising
their sons in dedication

to a single role—the way craftsmen took their trade to be
their name: carpenter, tailor, the ubiquitous
smith—and stack eternal odds in their favor: that the Calvinist
god’s estimation of the man match the quality of that man’s
performance in the role he’d been given. Such piety doubling
as social currency, suggesting an audience of more than
just One.
(“Landscape with Intervention”)

In poems observing the suburbs, he sustain his poetic scan with the attentions to language of a suburban Robert Browning:

… The living’s been easy, the fish are

Battered and fried and we drink malt liquor where
The shuttlecock stands at our feet. Each mother’s

Many cavaliers. In this way we feed ourselves
To coolers until they are empty. Feed me seltzer

And the sun-stained egg salad. Lay me in the long
Shade of the scoreboard, fraught and labile,

Soon to rise in the distant drum of a car
Stereo, rib-sauce still staining my lips.

Primarily Pardlo is a poet of meditation. His musicalities are quiet; his point of view elemental. He never feigns the vulgarity of nobility. The speakers of his poems–aware of beasts and small demands routinely met–are a person driving to work, a boy in sexual awakening collecting payment for his paper route, a man reading in bed by a window with bugs, an observer watching girls jump double-dutch, a sailor on shore leave (“dumb weed of me haphazardly potted”), a listener to the lament of flamenco or the double base thump of jazz. Pardlo is elegant with scale. He can hauntingly slide a lyric from Empire, Christendom, Pharaoh’s obelisk and Place de la Republique to one of Vincent Van Gogh’s shoes. In a single poem, his meditation may roam from Paris to Camden, New Jersey.

In the moniker “mad genius” Pardlo is astutely and correctly attracted to the “genius.” Each poem reaffirms the cogency of art, life, volition, and identity.

And its flimsy
accouterment, identity, seems pieced
together from rummage sales or applied
deceitfully like a kick-me sign
to the back. Scraps of gossip, scraps of habit, a cabinet
of curiosities acquired through will
and circumstance.

(These pieces put together—as opposed to being dissected–reminds one a bit of the 1992 Nobel Laureate address of Derek Walcott.)

… I’d started
Driving to the muddy shores of Medford Lakes
At night to swim alone and naked in the murk.

I would swim out far enough to not be noticed
From the bank and there I’d tread, zoning out
The wayward I was in. I’d cast myself

Like flotsam on the drink, stare into the sky
The listening of my tiny lungs and ride
The mirrored clouds and glinting fishes.

Word on the street is that Four Way Books has scheduled his next book for 2014. This reader, for one, eagerly awaits more of Gregory Pardlo’s meditations.