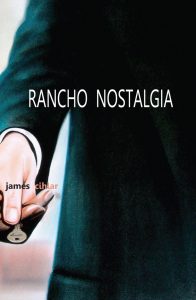 The year 2008 saw the release of Undoing, a very fine first book by a young poet. I had the pleasure of reviewing it for Coldfront Magazine. The poet was James Cihlar. Since then, Pudding House has published a chapbook. And now Cihlar has written a second book, in many ways a collaboration of the first.

Rancho Nostalgia has many themes. The divorce of parents, finding one’s own domestic bliss, coming to terms with one’s own generational piece of the American pie, and a glance at the developing aesthetics of an emerging poet. The book chooses a multi-terraced format and is not divided into sections (there are designated opening and closing poems). The themes of the book wind throughout; emotions ebb and flow. Different poetic notions present themselves in different layers throughout the book. There are frequent allusion to cinematographic moments: Bangles Carson, Audrey Hepburn, Robert Mitchum, Judy Garland. Cat Stevens, disco, and Diving into the Wreck appear in the poetry, as well. Of the animal kingdom, cats are the favored species.

One of the things that emerges is a patchwork of the ever undulating American dream:

Whatever/we did then, we do forever. In youth we have premonition.
In age, memory. Notions, whatnots, sundries,

on the Tenth Street Rexall Drugs billboard. I get it now.
No one is out to help us. No masters and apprentices.

… We learn even the simplest present tense must end, but there are clues

the world goes on: its bad habits of rerunning seasons
and eroding solids, its penchant for coups d’état.

Cihlar’s enterprise evolves out of a deconstruction of the home grown. Interestingly, things are not cerebralized into the trendy academic glass slipper of immigration or colonization. Cihlar stays in the atomized valences of personal estate and cultural nostalgia. American made. There are the soft folds or irony. Gay American (Steve Fellner, Michael Walsh, Peter Covino) and English poets are particularly adept at irony:

My dad took everything in the divorce.
All the stuff I’ve saved. Sheer drapes and cut glass.
Everything from the decree.
I asked for the quilt back. It was in rags.
We wish not to stop the passage of time,
but the ending of eras….

Living in one place long enough,
scary monsters in the basement
join us in the living room.

A young person in the latter part of the twentieth century in the ever-evolving United States assembled a life from necessity and bricolage, fragments from the past: pieces from the lives of parents’ tastes and broken dreams, pieces of information received from school, elements from narratives—movies, books, work experience, personal histories, sins, crimes, false starts, and spots of good fortune:

In Rancho Nostalgia Cihlar refers to life via a metaphor as “the Pied Piper’s apocalyptic jig toward death.” But he does undercut the fatality of that notion a bit with the hope that one day there will be a time when “we’ll be seen for who we are, and the past won’t matter anymore.” What later, Cihlar calls “the factory of the self.” We will ourselves forward. That factory is a bit like the movies. Tragic or melodramatic beginnings can give way to happy endings… like a young girl going West hoping to get married and live happily ever after. “God bless organza. God bless taffeta.”