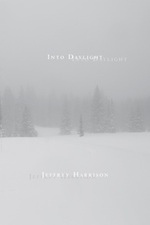 Into Daylight is divided into four sections. Harrison opens with a small pastoral poem and a tribute to John Clare, a poet known for dealing with elementalism, separation anxieties, and deep-seated disturbances. The poems in this opening section are based on casual conversations while taking meals with family and friends; on walks in the countryside where trails and dogs appear, disappear, and reappear. The unexpected death of a brother contrasts (Harrison has written a good deal about this in his early collections). Grief wells up with his non-reappearance. Harrison is artful, never arch. Like Clare, he is but a pilgrim with a penchant for getting lost; a poet, informed by the certitudes of poetry, but subject to meditations on the mystery of cause. The close of the section veers toward Gerard Manley Hopkins, lyric vision, and truncation.

In the second section, Harrison lyrically glides back and forth from small personal specificity to vastness. The images also move from the light of the Pacific shore to the light of New England. Old England is evoked as a descant. The world is full of natural wonders and processes and human mistakes; and, if one maintains a poetic vigilance, there are also small gestures of grace. In one poem, while reading Tolstoy, a dragonfly appears:

I was grateful for the quick gift of its visit,
but I saw that it too might be only
a diversion, a way to avoid looking hard
at myself—and just then it took off
with a sudden snapping flutter of its wings
and darted away in erratic flight,
leaving me to return to Ilyich’s death,
the blue lake shimmering all around me.

(“Ivan Ilyich at the Lake”)

In less capable hands the such a load of vignettes might feel tainted by the tedium of narcissism or too much poetic navel watching. But the poems do not stem from a distrust of creature comfort, nor are they weighted down by the burden of self-consciousness. Each is modest and sticks with the essentials. The one indulgence the poet does allow is the voice’s comfort found in literature. But it is clear that this, too, is not class vanity, but a part of the movement toward Source.

One is in and out of the world of commerce between men. Out for a walk or a jaunt with a loyal animal… only to return to work or art. Into Daylight strives for a kind of observance… an observance of a genuine life (“which if not dazzling is at least genuine”). In that sense, it is philosophically akin to Neil Shepard’s collection This Far from the Source. In another poem, the poet revels in a revelation shared by Virginia Woolf:

as if each person were a hive, with its own
murmurs and stirrings, that we visit like bees,
haunting its dark compartments, but reaching
only so far, never to the very heart, the queen’s
chamber where the deepest secrets are stored
(and only there to truly know another person),
through the vibrations and the dance of the worker bees
tell us something, give us something we can take
with us as we fly back out into honeyed daylight.

Harrison notes seasons, weather, flowers and animals, the events of children, and walks in the woods. He is far enough along in life to catalog events and chooses to cauterize some experiences, to submit to others. He takes note that one of his young roofers is a poet. There is an odd homage to the exposed shoulders of women at an otherwise banal fundraiser.

The ineffable that binds the past to the present, the concrete to the abstract, the seen to the unseen, life to art is the mortar of all poetry. Harrison evokes this notion fishing in the current of a stream… and in the faucet of his Massachusetts’ kitchen: “as if the clear stream flowed between two worlds / and entered this one through the kitchen faucet.”