Mezzanines by Matthew Olzmann is a first book and the winner of the 2011 Kundiman Poetry Prize, a prize dedicated to publishing work by Asian American poets. Part of the prize is the winning collection’s publication by Alice James Books. 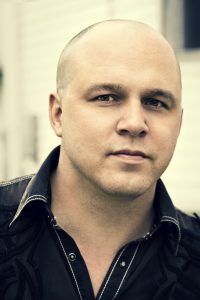 Olzmann is a product of the buzzing, flashing modern world. He draws with ease from contemporary material: U.S. shopping malls, passenger jets, a jukebox, laptops, immigration, alienation, secret agents and spies, space exploration, Star Trek, balloon animals, magic shows, fairytales, blue light from the TV, urban and classical mythology, real animals, and Japanese-disseminated anime with its animation style characterized by colorful graphics, vibrant characters, and fantastic themes. He also draws from the emotions of blood and received family: a German father, a Filipino mother, a grandmother, a brother, and a wife… who is herself an acclaimed poet, and–if one trusts the poems–someone who “can hold a pistol, gut a pig,” who is allergic to formic acid, and who–out of love–with her last dime, would buy her beloved a twenty-ounce bottle of Mountain Dew because she once overheard him say that he liked the stuff.

Olzmann’s is the voice of the observant, slow traveling, solitary figure… ironically beloved and surrounded by a teeming world. Consider “Melting Pot in Housewares Has a Slight Crack:”

down the middle. I’m one-half something.
One part stained glass window. One part

three-hour infomercial. A crucifix hangs
in my chest like a heart. Chamber music.

One part mestizo. One part mezzanine.
I know where the checkout lane is.

[…]  I say the word assimilation like a blade
of grass bending. Always bending. A hundred rows

of flickering TVs for newscasters to pronounce
immigration like a virus.

Here, in the theater of household
appliances….

The book is not divided into sections. So what the reader absorbs are poems of varying intensities and styles: a villanelle of lament, here; a jubilant love poem, there.

I filled the world with so much noise,
they needed earplugs to pray.
I threw tantrums like canisters of tear gas,
put my complaints in a cannon and shot
out the roof of our house. Even now,
I am a sound that does not stop.
I say I can’t, I need, I want, and Is there a God
and Yes there is and It’s Me Me Me….

And in another poem, “The Rug,” the simplicity of “So much detritus…so much work left to be done.” What we ask of the poet is to not leave us in the surface. Beneath the shallows of images, there is work to be done. Olzmann is young and adept. But he is also subtle, wise,… and, most of all, amiable. Mezzanines does not leave the reader in bewilderment. Poem by poem, Olzmann pulls us through. He knows that, in the end, the work is charged in a very different way than the zap of a cartoon:

You think it’s the smoke and mirrors
of fairy tales, the shadow game
of magic shows? On the news tonight,
a senator in our country mulls the viability
of using torture to protect democracy. Everyone
is watching. Event he quiet lady across
the street. Blue light from the TV fills
her apartment as she pours milk into a bowl
for her cat, then lifts a flowerpot from its place
on the windowsill and pulls it inside.

Whether bringing a plant in to protect it from a freeze, lost in the stands of the Hallmark card section, musing over alternative fuel sources, a Facebook page on a computer screen, or Newton’s law of physics, Olzmann plies back and forth from fantasy and a reality. His poems snake through a world riddled with natural and man-made dangers: water boarding, the Laramie Project, liquor store and gas  station stick-ups, the Westboro Baptist Church, modern oblivion. Perhaps the greatest danger is that we inhabitants of the wasteland lose faith in the capacity of ourselves and one another to rise to the challenges of life, meaning, and affection. With or without irony, it is always rewarding to hear the voice of the poem sign off with:

Let’s try to climb over the mess we’ve made of this place.
I’m trying to do that. I am sitting in front
of a blue screen, hitting a button over and over,
trying to send you the following message:

Hello, I am your friend.
I am wishing you happiness.