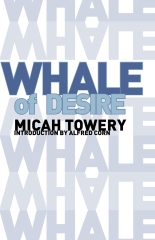 Micah Towery is an adjunct professor at Indiana University South Bend. Whale of Desire is his debut poetry collection. It is also the debut collection of Cat in the Sun Press, and a quite good one at that. Whale of Desire documents the struggle of a soul toward a kind of revelation and peace, and reminds one of those mystical books that chart a similar path, such as Interior Castle or The Dark Night of the Soul. Of course, it is also a collection of modern poetry, dealing with the complexities of a spiritual life in the context of gas stations and Coca-Cola factories.

Like many such struggles, there is an inherent dualism playing out. The one here is founded on the tension between our body of ever-renewing desires and a spirit that transcends it. The second poem of the collection, “Two Different Stories About the Same Thing, Both True” bodies it forth. In the poem, priests are out and about “catching the free fall / human spirits in their parachute cassocks.” Everyone is struggling to transcend, carrying around their body and its desires like a weight. It is portrayed comically as, for instance, when “Woody Allen was trying to find a parking spot / for his cross.” This second poem also asks about Saint Kevin, namely, what he did with his blackbird:

Because I’ve had several birds

try and nest on me, in my beard,
and trying to make them leave

It seems a comical version of Jacob wrestling his angel, blackbirds here standing in for angels. The first version of spirituality is of those who try by will to attain transcendence while the second version is one in which the angels come down to us according to our very human nature and needs. For this reason those birds nesting in his beard seem akin to Rilke’s angels who envy our human connection to things. In our nature there is something beyond them (the angels) that refines the cruder elements among which we live. That something is desire. As the opening poem tells us, it is the green whale to which we are lashed–this inevitably evokes thoughts of Moby Dick and the fate of Ahab. So, of course, there is a “Tribute to Herman Melville” later in the collection. It is one of several central poems upon which the collection pivots, Melville invoked as a kind of guiding spirit who:

. . . can tell me about
this empire, the transfiguration
of whales mating in the deep.

But before that transfiguration, the collection differentiates multiple types of desire. Even the opening epigram shows that desire is also a thing of the mind, as well as of the body. It’s a quote from St. Augustine, “Memory is the stomach of the mind.” Like the body, the mind digests its nourishment and lives to be hungry again. The boundary between body and mind is tested and sometimes lost. For instance, one speaker finds that women “conjure desire from thought” (“It’s Not That I Don’t Like Charlton Heston”), or another, in a junkyard, notices:

Here all hungers—
here desires: here I pit an unclaimed
tire iron against a windshield

when nobody looks anymore or asks
in passing who this air-bag exploded for.

This is one of those wonderful transfigurations of crude matter by our refining desires. For here, “miracles are brand new / tires still attached to smithereened / windshields.” Earlier, the speaker of “Love Song in the Light of Gas Stations,” declares:

. . . I’ve become accustomed
to false visions and vibrations,
the struggle of every little thing
and come to believe this might be a sort of love song.

This is the joy of desire itself, the struggle to love against everything that would deny it. This poem concludes, “I am so impulsive for you—/I write this in the cold for you.” So the collection’s general drift is to abandon willed transcendence as a path to the divine and instead follow the path of desire, perhaps echoing, vaguely, Blake’s epigram that “the path of excess leads to the palace of wisdom.” This requires embodiment, which is also central to progress along this path. The poem “I Leave Him There,” concludes:

A friend told me
Christ is risen
above jazz—
I leave Him there.

Here is the abandonment of willed transcendence. From this point on, desire seems to be the guiding principle toward the divine:

What whales
have swallowed us?
Spit us up and beached us
on these pews?
Two gluttons
who pray
in a baptism
of sweat

(“In Which We Pray the Prayers of the Eucharistic Adoration”)

Here desire is embraced in the symbol of the whale while alluding gently to Jonah. It is also an embodiment, a pivotal theme which the next 2 poems also develop.

In “An Autistic Child Swims with Dolphins,” he writes, “I lacked no body for speech.” And in one of a series of three love poems, Towery writes:

. . . I seek
any awkward go-between which leaves
the veil in place

I thought of the valle lacrimarum, but here transformed into a necessary embodiment of the speaker, the one who needs a “body for speech,” a body of desire to guide along the chosen path. Thus, these poems seek and attain the transformation of desire into love, sorrow into song, struggle into peace.

It is fitting that a collection so full of the yearning for a spiritual center is rich with allusion and reference. These poems engage our cultural history, religious and secular, in amazingly compressed ways. For instance, the collection’s opening poem, “Canzionere 189,” is only 14 lines but, including the title and epigrams, references or alludes to Petrarch, Horace, Frank O’ Hara, the Odyssey and Moby Dick. It’s like a small octopus with tentacles reaching in many directions, connected and rooted deeply in our culture. The hunger, the desire within these poems makes relevant everyone from Saint Augustine to Miles Davis. The spiritual quest that frames their spare lines causes them to feel vast. So a jazzy villanelle like “Moth (Psalm 39)” seems unbound by its formal structure and opens outward from the Psalm it plays off of.

The music of the poems is tame but elegant. Never seeming constrained, they fall in and out of various kinds of rhyme: exact, slant, internal, apocopated. Perhaps because the focus of the speaker of these poems is so clear, one never feels the music take over. Yet, one is aware of it, and can pause to enjoy its quiet undercurrents.

As the collection winds down, it asserts a few old notions: one is the idea of beauty, in which “beauty begins terror.” In Rilke, in Edmund Burke, one finds this definition of beauty as it relates to the sublime. These are old, noble notions and it is, at bottom, courageous to struggle toward them in a modern collection of poetry, in our era that is disillusioned with beauty as a means to truth or the divine. In its ever accelerating rush of information, entertainment, fast food, travel, our age is not likely have an easy time accepting the final poem’s recasting of a hymn to be still,

The way the feathers of a feather are when it’s blown,
still, be still, my soul.

Here the barbs and barbules that constitute a feather reassert Eliot’s “still point of the turning world.” And if a modern reader will take the journey from the collection’s beginning to its end, slow down and allow himself to follow each poem, he will find himself saying, “yes” to the beauty, “yes” to the sublime in its reimagining, and “yes,” to the peace the poems strive for, reassured in that still point in the closing words. He will remember, as many of us have surely forgotten, that even in our modern world, these are the foods that feed the ever hungry mind.

Michael T. Young’s fourth collection, The Beautiful Moment of Being Lost, can be purchased from the publisher: Poets Wear Prada. His chapbook, Living in the Counterpoint (Finishing Line Press), received the 2014 Jean Pedrick Chapbook Award. He received a fellowship from the New Jersey State Council on the Arts and the Chaffin Poetry Award. His work has appeared in numerous print and online journals including Edison Poetry Review, Fogged Clarity, Off the Coast, The Potomac Review, and The Raintown Review. His work also appears in the anthologies Phoenix Rising, Chance of a Ghost, In the Black/In the Red and is forthcoming in Rabbit Ears: TV Poems. He lives with his wife and children in Jersey City, New Jersey.
Loading Comments...