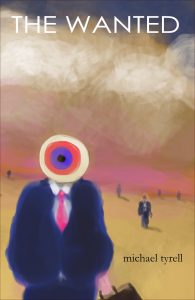 The eerily captivating cover of Michael Tyrell’s first collection of poetry was composed with a finger painting app on, yes, an iPhone 2g. That such an artistic image could be rendered from a device so frigidly modern is a statement indicative of what Tyrell has accomplished in The Wanted. The world as depicted in The Wanted is a suspicious, impersonal and frenetic place, yet clarity, and at times, even solace can be found through the speaker of these poems. The book’s great merit is not simply that Tyrell has managed to order the chaos of this world to create what Frost famously called “a momentary stay against confusion,” but that in doing so he has managed also to convey the very chaos itself. Take this excerpt from the poem “Do Not Duplicate”:

I hesitate before metal detectors
in stores where I haven’t stolen.
The tongue-tied clerk eyes me

like the voice teacher who ordered me
to hold breaths 10, 20 beats.
I don’t remember the penalty;

The fluid associations Tyrell makes in his poems mimic the movements of a mind that has taken refuge in the imagination, yet is still desperate to understand. There are a few pieces in The Wanted some may be tempted to call language poetry, given the way Tyrell turns colloquialisms upside-down in order to reveal their absurdity, but in the end even these are too lyric, too personal; the poet’s unrest too palpable to be deemed as such.

“Invisible Station,” the book’s explosive opening poem employs a series of run-on sentences that perfectly evoke the delirium of New York City’s Subway System. It is possibly the best poem concerning public transit I’ve ever read, not simply for its stylistic prowess but for this sparkling transition:

The Wanted also lays claim to a tremendous poem about insomnia (“Desert: Insomnia”) in which the speaker is likened to a lone student in a “windowless classroom.” Through this and other imaginings Tyrell communicates precisely the isolation and weariness of nights spent awake.

The most intimate poems in this collection explore the mystery of a father the speaker has never met. Tyrell’s speaker recalls experiences growing up in the care of a mother abandoned in a way that is fresh, poignant, and never overdone. In one poem, “I Will Be Your Customer This Evening,” Tyrell envisions the father as a waiter in a restaurant where the speaker dines:

No tintype or snapshot to compare myself
with the dressed-to-the-nines, all-thumbs waiter
at sixes-and-sevens, who made me
23 chromosomes what I am
but whom I’ve never met,
only this pronounced brow and jaw line,
my meager alleged inheritance
I magnify each morning,
this likeness on its squeaky accordion
I pull forward and hone raw
to keep the paychecks coming…

Above, as in much of The Wanted, we find Tyrell’s linguistic flair coupled with a subject of emotional resonance; clever language and deft timing are the means through which this poet accesses his speaker’s painful past. In many ways, the feeling of mystery, the gap in origin left in the departed father’s wake establish the tonal center around which all the poems in this book revolve. Though Tyrell’s speaker may be wounded, he is a precise navigator who knows his tack. Aboard The Wanted readers can rest assured they’re in capable hands, even though the sky above is electric.

*The Wanted can be purchased by clicking here.