As I understand it, Poetry is about sharing a sensibility: each artist in dialog with parts of the poetic tradition determining how to approach creating a resonant sensibility. 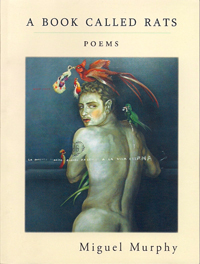 Many times I read books of poetry and ask myself questions about how the collection might privilege the poems and vice-versa. Sometimes weak poems are bolstered up by the structure of a collection. Conventional wisdom would have it that, in a solid book, every poem stands alone––even were it plucked out of the collection and read as a stand-alone poem.

For some time now, I have been approaching and re-approaching Miguel Murphy’s A Book Called Rats.

The opening poem, the title piece of the collection, sets out with an inhabited tone, the voice is one of mythologies and destinies. The voice, sifting through its own identity, eventually identifies with the pied-piper of Hamelin, the piper of rats who later plies his trade on children:

This is what I am: the piper
in the man, rat-king, the holy father with his kingdom
saying, look what you can have if you grow up.

The final poem in the collection, “Lament of the Rain God, Chac” is also a poem about identity and existence. Another slip of identity between Chac, a Mayan god, a component of whose worship is sacrifice and dismemberment, and a sub-urban boy with his father’s pocket-knife. Amidst the catching and killing, the heart is the central metaphor at stake:

…And his father’s
knife locks in place like a promise

made deep inside of him, that a day
will come when he
is the one feeling threatened. This
is the guarantee, the pact

I made with them, the beings
whose hearts I laced with kite string—
when I eat your heart you live.

Between these two remarkable poems rests the bulk of A Book Called Rats.

Murphy is a lyric, literary poet. Something like Garcia Lorca; ever present are the locked box of the Self and Death. Something like Baudelaire; his metaphors are artful, thoughtful, exquisite. Things effortlessly glide and shift into other things. Murphy is a high-wire poet. The stakes are as high as the risks: the Devious and the Angelic, the Murderous and the Marvelous. Ever aware of the persistence and frailty of existence, he excavates identity and choices. In the tradition of the poet that truly wants to immerse himself in a consuming element, Murphy writes his way between the two bookend poems. And the poems in between? Every poem stands alone.

There are confessions of flesh, deformity, and lust; confessions of childish, literary, and professional vices. In one, Actaeon cries out. A murderer plays the piano. An Alaskan crab is eaten. Love and Hunger ache. One poem revisits a delirious fever with chicken pox. Murphy is the lover who lives among wild beasts. A courageous struggling Self in the poem “Homesick” expounds:

was our only way to love. I hated them, so
I moved away. I moved away
and I remembered how much I wanted to be slapped
punched hit kicked hit vomited on set on fire
kissed and fucked, tucked in tight and protected—

oh world, how will I ever get home?