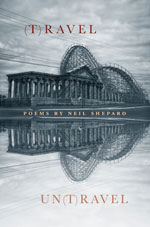 (T)ravel Un(T)ravel, Neil Shepard’s fourth book of poetry delivers the dependable style and rational weight of Shepard’s previous books –– and it takes a step further out into both the geographic and literary world. Shepard is not a jangly voice of novice experimentation; he is not the adventure driven lone wolf. Nor is he pilgrim or pedant. The good poet takes measured, reflective steps from Hampstead Heath and Paris to Shanghai and the Marquesas.

He travels with wife and daughter, and though they may make very slight appearances in the poetry, their existence fleshes out the nature of this traveler. He is western educated, principled, with responsibility, artful, and, perhaps at times, even mannered – understandably; as the poet does not throw off his colonial, Euro-centric, American, Jewish, straight male vestiges or vantages. All are a part of the inhabiting voice of this collection.

Early on, Shepard evokes a “squid’s eye / stabbed with a heke stick, its inky signature/ floating across the coral reef” and the knowing “the abrupt dislocation of matter.”

“The abrupt dislocation of matter” points a bit in the direction of the artistic spirit of Kurt Schwitter’s collages or Elizabeth Bishop’s poems and watercolors. It does not mean to expect the lyrical turns and romantic evocations of Pablo Neruda. What follows is more a catalog of earnest philosophical inquiries in which the poet is closely speaking into the ear of the reader. The reader is the real designated fellow-traveler of this collection.

One of the best poems in the book also makes its appearance early in the collection. It is a poem that points to Sacré Coeur on Montmartre and evokes Lot and mercy:

… what’s important in your long walks along the avenues
And that is? That’s none of your business. Just as you’ll never know
the last thoughts
of any common criminal on his way to the gallows, guillotine, firing
squad, electric chair,
who turns back a last time to his executioners, or beyond them, to
the world
be never made but always wanted, the world always beyond him, that
made him
commit the first crime, and the next, and the one after that, until his
unbearable
heart lead him here, without remorse, thirsting, dry-eyed, still licking
his salt-wounds.

(“From Pont de L’Alma, Looking Back at Sacré Coeur on Montmartre”)

In epigraphs, Shepard evokes Wallace Stevens, Edgar Allan Poe, Ralph Waldo Emerson, Robinson Jeffers, Walt Whitman, William Carlos Williams. I did qualify that Shepard’s is an American male reality and poetic imagination. And western. But the collection moves back and forth west to east, east to west. In a poem grounded in Shanghai:

And once in the evening, the patriotic music stiff and tinny…
its gut-wrenching one string bending music to querulous
interrogatives,
rising up from a street-level apartment—whither the future
of China, in spirit, or matter?–– and a listless answer,
a simple bamboo flute, the music floating down
from the rooftop where someone played, where caged
pigeons made their guttural calls and caged
crickets scraped their songs in early evening.

In another remarkable poem in the book, “On the Way to the Pantheon, Crossing Rue Mouffetard,” the speaker finds his way past lively descriptions of blue-black men vending wares and foods in the Paris streets. The four closing lines:

this bright mélange on the cobbled streets
confounding the eye, confusing the tongue––

something tight in my throat, these small lanes, lines I have to–
navigate to find my way to the famous dead of Le Panthéon.

Shepard ponders mortality, gender, geography. He is a seasoned poet. Even at mid-career, his artistic growth expresses that there are more good things to come to us from his dependable, philosophically poetic voice.

When I travel the world goes away.

The tour books disintegrate––
The Insider’s Guide, The Outsider’s Guide—
mystifications made of last year’s desires and copyrights.

[It’s] my own voice so shallow
it’s the flat report from an Etruscan cistern,
so deep it’s the long black echo
from the wells of Karez.

Scott Hightower is the author of three books. This fall, Self-Evident, his fourth collection stateside, is forthcoming from Barrow Street Press. Early next year, Oases/Hontanares, a bi-lingual book, is forthcoming from Devenir, Madrid. Hightower teaches as adjunct faculty at NYU and Drew University. A native of central Texas, he lives in Manhattan and sojourns in Spain.