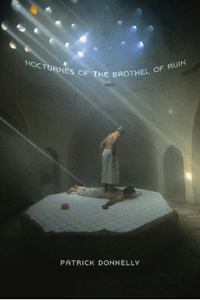 Patrick Donnelly’s second book has a very big title: Nocturnes of the Brothel of Ruin. As the title promises, the book is a compendium of night songs from the place where bodies seek love and lives encounter philosophical undoing. It also notes itself as “including translations from the Japanese with Stephen D. Miller.”

Besides East and West, the collection evokes domains of light and dark: from “empyrean” to “tenebra.” Empyrean being the dwelling-place of God, the blessed, celestial beings so divine they are made of pure light or fire (it is also applied to the characteristic smell of burning or charring of vegetable or animal matter, as in that of an offering) and the source of light and creation. “Tiger, Tiger BURNING bright….” Tenebrae being the domain of the dark.

The book is divided into three sections. And weaves from short, pared Japanese translations to poems grounded in the present modern urbane landscape. Mars and Venus also make an appearance:

…every gesture triggers
a cascade of ghost futures, reels
Mars and Venus around
the roulette of their mansions.

One poem features a bowl with a pair of boys (shepherds) looking out at the world. Hunger, sustenance, companionship, existential forgiveness and demise all become themes:

I found my life so late—
leave me a little time
to love his grayblue eyes forgiving
what is unworthy in mine.

There is nakedness, hunting, and delight. There are meditations on the melancholy of earthly love woven with the raptures of celestial love. And the section closes out with a poem about the putrefying fecundity of a corpse flower, a large outrageous blossom.

The third section is made of songs of the cloud of unknowing. The landscape is less about being consumed by fire and there is more a tone of acceptance… acceptance of one’s vigilance so that one can carry armfuls of the “winter brush / through the narrow gate / to the spring bonfire” (“Man Kann Nicht”).

By accepting the tight budget of years
left me—
small yard, narrow bed—
I made peace with the penalty
some say is fixed for those who pour
sexual pleasure over loneliness.

But because a bitter powder
burns my blood sweet every day,
the weird wages of sin in my case
has been life, unprepared-for life
…the punishment
we expected never came.

Nocturnes of the Brothel of Ruin is a thoughtful book for mature readers. Patrick Donnelly is well on his way, clearly he has more to tell.