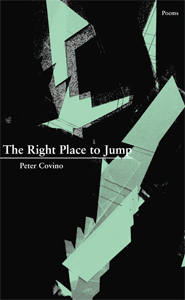 The transplant team arrived
Exactly five minutes after
She flatlined.
When they cut into her,
Her face twitched

And her eyes
Flew open,
A customary reflex
We’d read and heard about
But never experienced first hand.“

The give and take of class structure is always creaking in the background.A beat-up rental car. There are no jobs at the Fiat plant. In one poem, the speaker, a young profane college student with cheap cosmetics and ramped up testosterone, tramps through a Halloween:

“Our lipstick and
makeup smeared; our necks stiff from all
the sootheless-tangle.

…and, in a couple of hours, I still
gotta get up for work.

(“Such a Drag to Want Something Sometime”)

In each poem, Covino masterfully tracks the emotion of the speaker’s voice; each poem, propels forward the inhabiting minute. This is not the Zen of Jean Gallagher’s This Minute or Chris Patton’s Ox (another pair of books that wrestle with the notion of moment and that I greatly admire). Covino is pagan and catholic (that is with a little “c”). He is profane, profound,and cleansing. Perhaps there is a little of James Bond in him. In “The River” a poem with running water as the central manifold:

“You have loved me too well and not enough….

The right place to jump?

(Disclosure note: The author is a friend and I am listed among the Thank You’s.
We have worked together on many projects, including my own last Stateside publication.)