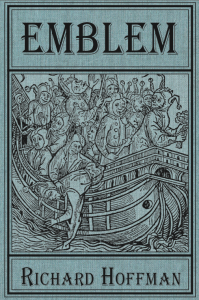 Emblem departs from Alciati’s 1531 Emblemata, a Latin metrical collection of moral, proverb-like sayings, in which ethical teaching is couched in elegant and forceful diction. That text is accompanied by woodcuts. After Alciati, writing such a collection became a pastime for humanists steeped in classical culture; which is to say, with Emblemata, Alciati spawned thousands of imitations, creating a Renaissance genre.

Hoffman’s Emblem is not an emblem book, though the second section of the book draws closest to wit and forceful diction. Beautifully designed and composed, Emblem is an outstanding book of poetry. A response to yankee puritanism, humanist cynicism, and Zen. It is book of lovely georgics about finding one’s way in the world; perhaps of finding one’s way to one’s creative source and to finding one’s balance with the world.

Yes, the world may be a ship of fools, but it is a magical place. In one poem an ancestral monster comes bounding to assist its progeny. In others, a husband watches a plumber “snaking” a drain, Columbus (another specious world voyager?) discovers––not Indians––but the working class; aphrodisia is deconstructed in a villanelle. There are celebrations of laughter and the nutritions and joys of a life of wakefulness and watchfulness; futility, nothingness, cowardice, and apathy are used as foils, and at the same time are exposed.

In one poem, fire metaphorically rises to make a cloud and eventually extinguishes its own ancestral fire. In different poems, Hoffman’s imagination engages fire, earth, water, air, and aether.The physical world is ethereally reflected in poetics. In another lyric, the voice in the poem theistically considers a New England snow storm:

You have made me to seek refuge
and charged me to care for my brothers.

How cruel. That could only be You out there
howling, cracking the trees, burying everything.
What could I possibly want from You
that would not undo the whole world as it is?

In one––if security is what we want, the voice adjures us “to walk among thieves: Pocketless.” In another, “On Impulsiveness,” the lean, solitary living bobcat keeps springing after pray leaving the dogs to devour his kill (work ethic overkill?). The dogs, being social creatures, have to accommodate to live and hunt in a pack; but by sacrificing their privacy, they are well fed.

Shall we read the meaning
that he rules both land and sea?
For flowers, one must wait for their season,
and to catch a fish means patient waiting too,

a day declines to evening and you doubt your luck
and wonder at the river’s mysteries, hoping
down below the worm still wriggles on your hook.

There are passages of arresting ars poetica:

protect me from haste,
from willingness,
from forgetfulness,
and the wish to please….

Here in my head the world
abrades and sparks. Still, this kind of understanding is like
those photographs of lightning over the sea or the plains,
exquisite but no longer thrilling because no longer auguring

thunder seconds later to disclose how far away the rain is,
how much time we have to take shelter, to gather what we’ve
brought, to confer with one another whether we will make it.

“Here in my head the world.” The English word world comes from the Old English weorold, weorld, worold (-uld, -eld), a compound of wer “man” and eld “age.” (The fullness of the world is perhaps likened to the mature, perceiving individual.) The corresponding word in Latin mundus, literally means “clean, elegant”, itself a loan translation of Greek cosmos “orderly arrangement.”

Emblem is Hoffman’s wise, artful meditation from aboard the ship of fools; his balanced poetic meditation on the “orderly arrangement” of our world.

Scott Hightower is the author of three books. This fall, Self-Evident, his fourth collection stateside, was recently released by Barrow Street Press. Early next year, Oases/Hontanares, a bi-lingual book, is forthcoming from Devenir, Madrid. Hightower teaches as adjunct faculty at NYU and Drew University. A native of central Texas, he lives in Manhattan and sojourns in Spain.
Loading Comments...