Anatomy of Melancholy and Other Poems, Robert Wrigley
Penguin Poets, 2013.

One asks that a poet’s linguistic command be equal to the task of their vision. Robert Wrigley regards the world with unrelenting wonder and his precision with language surpasses the surgical. One can ask for little else. 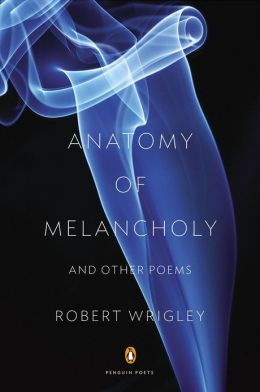 Anatomy of Melancholy and Other Poems is Wrigley’s ninth book of poetry in a career that has spanned thirty-five years and garnered him the Poets’ Prize, the Kingsley Tufts Award and six Pushcart Prizes, among other honors. Despite the precedence given to the title poem (which refers to 17th century scholar Robert Burton’s book of the same name), Wrigley’s new collection is not overly preoccupied with sorrow. This is a poet with a big heart and an athletic imagination, neither of which would be content, or naive enough, to constrain their focus to melancholia. No, Anatomy is an emotionally and intellectually sprawling collection that illuminates and interrogates a spectrum of experience and fascination. One refrains from writing human experience and fascination only because the book contains a dreaming steer, a ruminative hen named Cassandra Blue, an aloof but imperial moose, a dog who engages with Tolstoy, and a snail coasting razor blades in quest of lettuce. There’s a lot here, and abiding throughout are Wrigley’s supple cadences, crystalline descriptions, and a syntactic acumen that borders on wizardry. Consider the closing lines of “Descartes” in which Wrigley imagines the philosopher (famous of course for the pronouncement “I think, therefore I am.”) reflecting on the death of his five-year-old daughter:

Little about the moon has changed
since Descartes would have looked upon it and thought,
though he must have also felt how little his thinking mattered
in the end, proving, as it did, nothing but that she had been,
and was, though he could not stop thinking of her, no more.

Lost to the economy of this excerpt are Wrigley’s deft temporal maneuvers in the poem which hinge concurrently on the constancy of the moon and Descartes’ four hundred year old surmise, exposed, ultimately, as perhaps a little tenuous. Wrigley’s fluidity in moving through time and memory may be on its finest display in “Friendly Fire”, a piece in which a looping “Moonlight Serenade” births a decades-spanning examination of responsibility and regret, both public and private:

…She had left
Glenn Miller spinning, the changer arm up,
so that the song played again and again,

as it has in my mind for fifteen continuous hours now,
wordless through that day’s stewed beef heart
and mashed potatoes, and through my lunch today as well—
some yogurt and fruit, a handful of nuts,

for now I am sixty, and while it is unclear
if I have any interest in reaching the age my father is,
I go on as though it were perfectly clear.
In 1967, he’d begun the long fall from faith,

believing never in God but somehow
in the nation, while I’d been spared any sense
of the holiness of either…

Above, and throughout Anatomy, Wrigley remains attentive to his reader. These poems are accessible, and the judicious eye will see everything the poet intends it to. The ambiguity in Anatomy lies not in the language, but in the world it depicts. Not even a poet of Wrigley’s skill can offer us moral absolutes, nor is he concerned with doing so. Like our best poetry, Wrigley’s documents the ironic and subtle, the curious and painful, leaving it to his readers to draw what conclusions they may. One conclusion hard to avoid upon reading Wrigley’s latest collection is that it was written by an exceptional poet at the peak of his powers.