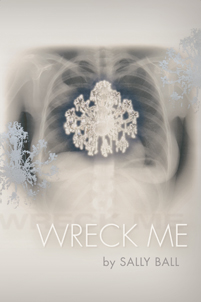 Before obtaining my copy of Wreck Me, Sally Ball’s new book, her second, I casually asked a friend, a fellow reader, for observations. My friend responded that it was okay, but was not sure that it was any better than her first.

My friend was very, very mistaken. Wreck Me is dazzling.

It is simple to enter, simple to read at face value. The going on the page is not taxing; it is subtle and poignant. Poetry, like science, brushes the occult; and, at its best, is a clear investigation into phenomenal cause. Both are also a study in elegance: using the very least to garner the very most. While reading Sally Ball’s poetry, one asks questions about the place of poetry and science as investigative techniques–and that is why Sally Ball always makes my list as one of the most interesting and important young poets working in the U.S.. Sally Ball, un-slathered in histrionics, is the real deal.

The “magic” of ancient (Greek, Hebrew, Egyptian?) temples, with their alchemic and geometric studies rumble beneath the quotidian…a wife, a daughter or son to raise, a father to advocate and care for in a hospital setting, surrounded by the sacred geometry and screens of modern science. Amid blood transfusions, one can feel the protagonist poetically informed … by Hooke and Newton, by English poetic literary tradition, and by the tectonic plates of her own life:

we filled his veins and ventricles.
He is the happiest and most robust. No promises,
said the monitors, they only ticked
and glimmered while we watched, transfixed.

Wreck Me as a collection, evolves around a father’s failing lungs and the need for an organ donation to set the wheels of life spinning in a more sustainable direction. The man’s daughter is a poet of acute observation, reflection, and subtlety. She is a mother, herself. The context is of corporeal familiarity… and abiding desires and experiences of abilities and inabilities.

I wanted the storm to hit—surely more
than I wanted the previous weather,
a dense, numbing kind of pressure.

I must have wanted the strike of it.

so utterly open one gets dizzy looking out

And the next poem (“In Love’s Soft Surgery Skill’d”) begins with the simple statement: “The body I know best belongs to you….”

“Dear Matthew” is a wrenching poem about finding peace in one’s life through sacrifice. “Parable” is a villanelle about finding harmony in dissipation. “Quarry” is a poem about somnalistic augury. And so the unvarnished poems excavate, geologically expressing their own divine geometry:

What do birds mean, in dreams?
What wisdom failed or died?
What flight, what predatory urge?

The poem “Flash” contains the desire to address a herd of deer:

They [You/I?] will not die
miserably for lack of what is found here.

The book nearly collapses into Emersonian philosophical observation–which is to say that Ball is graceful as a content-bearing poet leaning into metaphysics. But she does not limit herself to commentary and does not lapse into unhinged mysticism; she is masterful as a poet. Wreck Me holds the line and is a philosophically elegant book to read…. and reread… and reread. Barrow Street, please, send us more, more of Sally Ball’s poetry.