TJ Jarrett’s newest collection, Zion, does not forget. Her poems do not turn away from painful realities toward nostalgic dreams. Instead, these poems countenance the hard past (and present) through the lens of the personal and the familial in order to prepare for a kind of crossing. In doing so they chisel new feeling from the rag and bone shop of the heart. New feeling, I think, is a rare find in poetry. Not only must the poet sing and render a singular expression of emotion and intellect caught in the net of the material world, but the poet may be required to cast off into the chthonic regions of nightmare vision and trauma to attain that feeling. 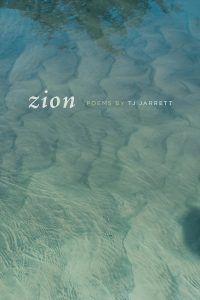 The opening poem of the collection, “My Grandmother Describes the Radiance” , potentiates a distance to be traversed by the poems:

this body
has always been

The collection begins in pronouncement. The Grandmother, in precise and declarative lyricism, establishes the speaker’s capacity for movement. So, while the reader may wonder about the physical place of the collection, there can be no question regarding the psychic space. It is a space of possibility.

In “Meridian, MS 1978: Miss Polly Attends the Altar at Mt. Zion” the reader is introduced to the book’s structuring emotion – forgiveness. The poem begins, “I want to be moved, to forgive, to let forgiveness bear away / memory …” Memory refuses to be borne away, though. By the end of the poem, the speaker can still only state her desire to forgive: “Oh Lord, move me. I want to be moved.” Desire is coupled with resistance.

The poems in Zion are varied in their explorations. Open the book at random and you may find a poem driven by landscape, language, history, or memory. You may find an interrogation of metaphor or of nostalgia. Throughout, though, many of the poems share a common origin; they arise from the simultaneous desire and resistance toward the act of forgiving.

Each poem, I think, reveals an aspect of this psychic struggle. Perhaps each poem opens pathways for the next imaginative movement. For me, though, Zion finds its deepest channel of feeling in the beautiful sequence (and dangerous journey) of imagined dialogues between the speaker and her interlocutor, Theodore Bilbo, former Mississippi governor and an embodiment of historic and institutional white racism. Through this highly imagined exchange, Jarrett explores the complicated and painful emotional terrain surrounding the personal, cultural, and historic experience of race. The unlikely meeting of the speaker and Theodore Bilbo is the book’s dreamy divagation, and Jarrett gives this troubling and poignant exchange the space it needs to develop and ultimately transform consciousness.

Zion maps a speaker’s path toward a reckoning with the personal and collective trauma of racism. It is a path of memory and imagination in which the speaker inhabits a variety of temporalities and dreamscapes: a survey of dates taken from the titles and subtitles of poems – 1866, 1951, 1958, 1964, 1978, 2012, and even “Meridian, Last Night” – reveals the shifting nature of time in relation to the developing emotional and psychic reckoning. The path toward new understanding and new feeling – which is the ultimate itinerary of Zion – is a movement of imagination where the intersection of time, memory, dream, and history is as fluid and malleable as alluvial fans shaped and reshaped by the constant motion of a stream.