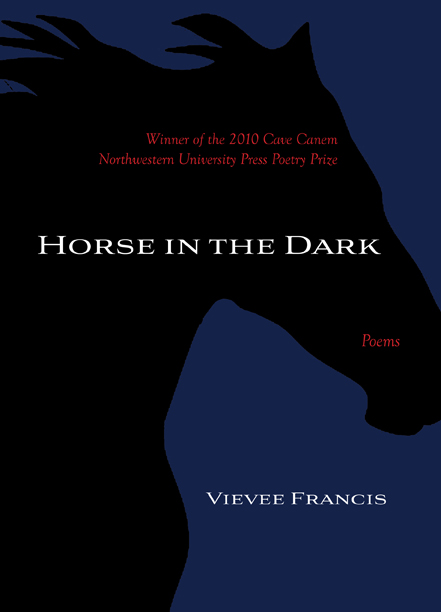 Blue-Tail Fly, Vievee Francis’s first collection (2006), gave voice to the period of American history between the Mexican-American War and the Civil War. By cleverly braiding poetics and rhetorics Francis revealed sorrows, acts of brutality, hidden desires, and systemic violence.
I had the opportunity to meet and share a meal with Ms. Francis at a conference that summer. Following that meeting, I reviewed Blue-Tail Fly for Green Mountains Review (Vol XXII, No. 2, 2010).

Later, Ms. Francis was the recipient of a 2009 Rona Jaffe Foundation Writer’s Award. By then word was out about a new book!

Horse In The Dark is Francis’s new book — and it is the winner of the 2010 Cave Canem Northwestern University Press Poetry Prize. So many suitors…. Who can resist Vievee Francis?

Horse in the Dark is the long version of Philip Larkin’s line “What will survive of us is love.” It opens with two guide poems that point to hidden vocabularies and smoky mythologies. Creation has not hardened into the absolute diction of the world: holy-halved men, centaurs, monstrous beasts and birds, satyrs, and a young woman with eight limbs. Francis’s book then moves out into the first section with poems of a harsh 1950’s West Texas landscape: an infestation of jack-rabbits … and browns and blacks. A little girl smells biscuits and pork:

The cemetery and the gardens
are kept by fire ants.
They crawl up a leg as one prays

for a different life, or
a heaven like home,
only free of the rod.
(“The Plain of Sudden Circumstance”)

The circumstances are harsh. The poems are excruciatingly beautiful. The young protagonist is aware of guns, bullsnakes, hollyhawks, guns, a cowboy’s son, and that her brown mare, Trixie, lives on her “grandmother’s land a few hundred miles east:”

She [Trixie] lived on my grandmother’s

land a few hundred miles east,
far from tumbleweeds, god towns,
the sun like the round hole 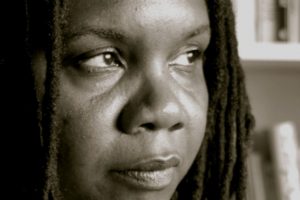 of a lariat over a cow’s neck.

She lived where there were more
trees, more shade, but just
as many men with rifles.
Rifles killed a mad crow that year—
loosed from a bird’s cage
at the Conoco….”
(“The Cowboy’s Son”)

In section two the poems move to East Texas and broader experiences: fishing, peaches, a body to sustain, a race, a gender, the precarious security of a grandmother doing her best to keep evil spirits away:

My grandmother had outlived two men,
one two decades her senior. She had kept a pie tin
filled with ammonia under the bed for their good luck.
He left everything to his children.
He left her nothing but alone.
(“Still Life with Another Grandfather, Masons, and a Pie Tin Under the Bed”)

In section three the poems continue to scratch the East Texas landscape, the measure of memory, and the limits of language. The poetry, casting even further out into relationships, blooms out to remind that “Every man [is] his own horse.” The poet adjures Chiron, “you were meant to sing,/so lay down your bow.”

The fourth section pulls together all the previous themes of the book… and departs from there: “Pity the Swine Its Succulence” and an “Ars Poetica” which opens with “I keep rifles in the closet” and concludes with: “I know the value of my property./Ungloved, I place the barbed wire.”