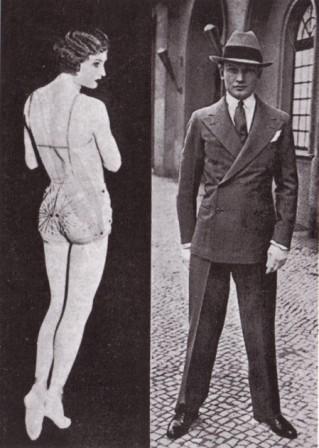 Just last month I reviewed B.K. Fischer’s Mutiny Gallery, a novel in verse. Some research I was conducting sent me to another title: Different Fleshes, another novel told through poetry, written by Albert Goldbarth. Goldbarth is a two-time winner of the National Book Critics Circle Award. Yet, Different Fleshes was not one of those two books. So, why go back and review a little celebrated 33-year old book?

Barbette was an American female impersonator, aerialist born as Vander Clyde in 1899. Barbette attained great popularity throughout the United States and in Europe, particularly in Paris in the 1920’s and 30’s. After historically bewitching performances, the makeup enhanced, pale skinned Barbette would dramatically doff her wig revealing that she was a he!

In 1926, Jean Cocteau wrote an influential essay on the nature and artifice of the theater called “Le Numéro Barbette,” an essay celebrating Barbette as an exemplar of theatrical artifice—the artist sacrificing everything for art. Cocteau commissioned a series of photographs of Barbette by the Surrealist Man Ray. And, four years later, Cocteau cast Barbette in cameos in his first film Le Sang d’un Poete. The cultural trail is rich. Barbette may have been the inspiration for the 1933 German film Viktor und Victoria, which features a plot about a woman pretending to be a female impersonator whose gimmick was removing her wig. Sound familiar?

This gimmick was later referenced or employed in a French play by Jean Poiret and a later French movie entitled Le Cage au Folles (1978). (The French made two sequels in 1980 and ’85). In 1982, Blake Edwards came out with his American-made movie Victor Victoria. In 1993, New York based performance artist John Kelly, under commission from the Brooklyn Academy of Music, based his piece Light Shall Lift Them on the Parisian-celebrated Vander Clyde. In 1995, Victor Victoria became a Broadway show. In 1996, The Birdcage, the American remake of the French Le Cage au Folles, was released. This celebrated entertainer’s story is also told in the play Barbette, written by Bill Lengfelder and David Goodwin and presented in Dallas, Texas in 2003, with Joey Steakley portraying Barbette.

It is very easy to lose Goldbarth’s 1979 novel told through poetry amidst all the other work Barbette has inspired, as Vander Clyde seems to have spawned an entire cottage industry– odd for a man of modest beginnings and endings.

In 1899, Vander Clyde was born in Round Rock, Texas, a remote and unassuming town in central Texas, a few miles from Austin. After his almost-two-decade craze in Paris, things changed and Barbette returned to the United States where he worked as an artistic director and aerialist trainer for a number of circuses and as a consult on several films. One particularly notable gig: he was hired to coach Jack Lemmon and Tony Curtis on gender illusion for the 1959 film Some Like It Hot. (One cannot help but wonder if he and Marilyn Monroe might have met.) In 1973, he died, his body was cremated, and his ashes were interred in Round Rock. Today, a simple gray granite stone marks his grave. 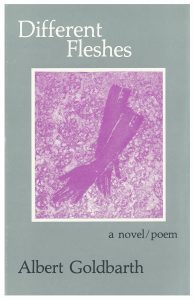 Paul Christensen, in “How to Read a Poem,” one of his chapters in West of the American Dream, mentions:

Barbette … violates the stereotype of the Texas he-man; a frilly drag queen swinging above a nightclub audience of the demi-monde was not exactly ranch material. But the poem is funny, even hysterical in places, and puts Hemingway admiringly on the same bed with Barbette in a bedroom rendezvous replete with ironies to keep the Hemingway scholars scratching their heads. (p. 191)

Of the process of writing this book, Goldbarth said:

Everything not true to verifiable fact I’ve hoped is true anyway to a verifiable spirit—keeping in mind Lily Tomin’s character Edith Ann: “… and truth can be made up, if you know how.”

Writing a non-fiction book through poetry presents many demands. Goldbarth enlists verifiable facts and succeeds in creating a novel through poetry. Different Fleshes is worthy of discovery of a new audience or a revisit by an already familiar one.

“Let him
study the colors of Vander’s lotions. In Paris,
remember Paris? Then everyone
sleeps. I mean everyone, Like ‘em or not.

Look up. It happened this way. And
some of them slept with Clock-in-the-ribs,
or Brick, or Billfold, or Plasticine.
–But I mean my friends, vulnerable and raw.

Everybody with a heart was looking for a skin.

(Final passage of the novel.)