Sandy Harris died on her way to dress rehearsal two days before the opera premiere. Most of the ensemble didn’t notice her absence. She was nine years old. The other children in the chorus whispered her name while mothers fitted their wig-caps and buttoned their long red robes. Her costume remained on the rack, stiff and heavy over satin slippers. Before long, the stagehand appeared, miscounted, and led them to the orchestra pit.

The children passed an exit propped open with a travel mug; wind and cigarette smoke pushed into the hallway. Near the stage, a row of impaled heads leaned against the stairwell, suitors who failed to answer the princess’s riddles. Layers of drops, snow-capped mountains and Chinese gardens, lined the backstage. The principal singers remained behind doors closed to their dressing rooms while sopranos and baritones from the adult chorus attacked the empty seats with their vibratos. The children sat on the apron and dangled their feet into the orchestra pit, above a tuning tuba. “We’re missing one,” the children’s director said. “Who’s missing?”

One child raised her hand, out of habit, and told him Sandy was probably stuck in traffic. He told her to spit out her gum, threatening to replace her with someone more professional. She swallowed. Tears smudged her almond-painted eyes. He conducted their scales and they returned to the dressing room.

Homework waited in book bags. The boys drew caricatures of the girls with extended noses and wider ears. The girls filled their notebooks with lists of potential husbands, makes of cars, and dream careers. The mothers made sure they kept their fingers away from their powdered faces. They watched the door for Sandy to barge in at any moment, out of breath and apologetic. She did not come. The overture commenced through the intercom.

“This music is disturbing,” one mother said to another while re-stuffing her daughter’s braids into a wig cap. The opera began with the dissonant chorus harmonies; slaves beaten, crying for mercy.

“He was sick when he wrote it,” the other mother said. “He died before he finished the score.”

The stagehand reappeared and led the children backstage for their first entrance. The princess climbed into a wooden lotus flower suspended by piano wire. She did not return their stares while she rose into the fly gallery. The flower wobbled, bits of light caught on her icy crown, until she disappeared into the shadows. Meanwhile, the stage manager passed out paper lanterns dangling from brass rods for the children to carry. Just when she would ask them about the extra lantern, a tenor from the adult chorus interrupted and pulled her aside.

The music stopped. An hour passed while light board operators refigured cues for the princess’s entrance.

“She’s still up there,” a child said, pointing.

“Less orange.” The director’s voice echoed over the loud speaker. “I want to see the lanterns glow.”

The children took turns balancing the rods on their curved palms. Their scalps itched. They had to wait for a stagehand to escort them to a bathroom. Girls practiced ballet positions while boys played a condensed version of freeze tag around a row of Chinese dragons.

At her command, they crossed the stage in a solemn procession. Their melded voices drifted over the accompaniment. The girl last in line nearly tripped while arching her neck to catch a glimpse of the princess floating down to center stage. Behind the curtains once again, they leaned their lanterns against a wall and flexed their aching arms. The children’s conductor waited in their dressing room with notes. He told them to hold the rods at waist-level and keep them straight, to open their mouths more when they sing, and that he noticed the girl who broke her concentration. He did not mention Sandy.

At intermission, the children darted out into the auditorium. The house-lights dimmed and act three began in front of a Chinese palace façade. Their eyes grew heavy while attempting to follow subtitles. It was well-past their bedtimes. They slipped to the floor beneath the seats until a stagehand tapped them awake.

“It’s finale time,” she said, and counted the tassels on their hats as they lined up once more. When she only counted fifteen, she glanced beneath the seats and across the aisles for the missing child. She found no shadow, figured she was tired. Paper petals drifted to the stage floor, the curtain came down, and at two-thirty in the morning, the director called it a night.

One of the mothers brought carnations for the opening and set them along the dressing table. She wrote the children’s names on colored paper, bent into the shapes of fans, and attached a chocolate kiss to each. “They can’t eat in costume,” another mother said. Sandy’s flower was pink with yellow around the petal tips.

Before the children could change into costume, the artistic director gathered the ensemble behind the curtain for a ten-minute memorial. “We’ve had a tragedy,” she said, and told them Sandy’s body was found beneath a shattered windshield on the Lodge Freeway. Her father also passed away in the five-car collision. The ensemble would collect donations for funeral flowers. The director said, “She was a nice girl,” as if she knew her well.

The children returned to the dressing room filled with her absence: quiet Sandy Harris from Farmington Hills; dark haired, wide-eyed, quick to pick up complicated melodies, always on the outskirts of their attention with a book in her grasp. After the performance, her carnation remained on the dressing table until the petals withered and the chocolate melted beneath warm lights. 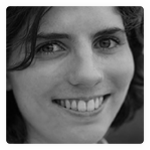 Nora Bonner is currently completing her MA in Fiction at Miami University. In 2002, she received a Hopwood Award from the University of Michigan. Her fiction is forthcoming in Shenandoah, and has appeared in Octopus Beak and Eclectica Online, among others.