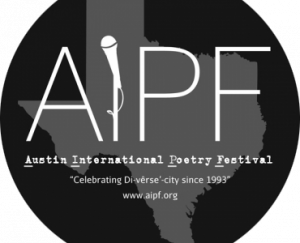 I have always said that I don’t want to go to a Writer’s Conference with poets only.  I like hearing what the fiction writers are doing, what they’re reading, what their homework is, and the snarky little comments about whoever they’re workshopping tomorrow or who they workshopped today.  Plus I have a friend who’s a fiction writer and she’s a blast to go to conferences with.

But this was a Festival and therefore different.  I loved that it was all poets.  Okay some could have timed themselves a little better at open mics but still, one or two poems too many does not do as much harm to the clock as someone who reads the entire first chapter of their novel-in-progress – after first using their allotted time to explain the plot!

This was the 20th anniversary of the Austin International Poetry Festival (AIPF).  The Board just recently changed so I’m sure there were some unexpected challenges but every challenge is a learning experience.

Here’s what I learned:

Make sure you stay at a hotel that serves breakfast.  There are tons of fabulous breakfast places – we ate at The Magnolia Café and Ciscos to name two, but I need some coffee and a banana beforehand.  Otherwise people will say “how interesting that there’s a storm cloud inside the restaurant and its right over Tobi’s head!”  Not a way to make a good first impression.

Likewise, carry protein bars.  And change for the coke machines if/when you find one.

Coffee house espresso machines are quiet for no man.  The coffee house venues were generous and some had great names.  I read at the Monkey’s Nest and Kick Butt Coffee.  I tried to read at Monkey’s Butt but I made that up.  Some of the hosts were wonderful.  I loved chit-chatting with them on the way up to the mic in a weird attempt to make everyone feel comfortable with the poet from California, including myself.  I hope it worked.

I learned I am not a nature poet.  My idea of nature – a man stumbles home on wet Austin streets/ pecans sliding under his soles/ only to see his woman sitting at the table/ in the front window of their house/ with another man./  They are drinking wine the color of the blood/ draining from his face/ fastening his tipsy legs to the sidewalk/ where he cannot look away. Thankfully the beauty of the AIPF is that it isn’t only for nature poets at all!

And I learned that I cannot write Haiku.  I am still stuck in “5-7-5 land”, even though I asked experts, received guidance and guidelines, and understand why Haiku and other forms of Japanese poetry are not as strict about syllable counts as they once were.  Still, my Haiku leans toward:

This meant that neither the Haiku reading, nor any related workshop was for me.  There were plenty of other places for me to not frustrate my fellow participants.

One night a bunch of us had dinner at Threadgills.  I learned that a “James Bond” is a vodka martini with a little gin.  I’d never heard of that before.  For the next year I will probably whine about the list of vegetables that included cheese grits, mashed potatoes with bacon gravy, scalloped potatoes and mac n’ cheese and I ordered green beans and cole slaw!  Seeing pictures of myself from this weekend I know it was the right choice, but damn I wanted those grits!

Did I mention I got to meet some old facebook friends, make some new ones, hear some heart-stopping poetry and get in and out of the back of a Mini-Cooper all day on Thursday without getting stuck once?

Finally, in my best awards-show voice, thank you Darla and Travis, Twister, David, Scott, Kelly Ann, Glynn, John and Ron.  Thank you Robert, the girl at BookPeople trying to remember Scorpions songs, all our cab drivers who could be poems themselves, Cherry St., a new Italian restaurant at 1612 Lavaca St. worth the trip to Austin in itself.  Thank you Oscar, everyone I unintentionally did not mention, and my sweet, wonderful Jeffrey for a great 4 days in a fabulous city.  Looking forward to next year!

Tobi Cogswell just returned from 4 days at the AIPF.  Tobi is a two time Pushcart nominee, for poetry, not for blogs.  Her latest chapbook is “Lit Up” from Kindred Spirit Press.  She is the co-editor and co-publisher of San Pedro River Review (www.sprreview.com).  Tobi absolutely detests writing longhand, but wrote this on the plane home from Austin so everyone could know how wonderful the festival was as soon as possible.