I want to cross the road in my naked feet. I want to introduce you to Planter’s Punch. I want to go on declaring since, as a child, I was forbidden to make a single one, and I have all that time to stand up for.

Beatrice Straight and I were pausing in the middle of Main Street. The whole of East Hampton a welter long after midnight, we saw the magnolia opposite us hoist its throat-colored petals into booming rain, as if to drink must be all. Hitching up her quilted skirt, a shoe in each hand, Beatrice slapped through wet to the other side. A few hours earlier, she was the Jocasta of Howard Moss as he retells the tale in The Palace at 4 A.M., the John Drew Theatre becoming Thebes and Beatrice that body dangling in the window, a half-moon bright as glass over the lake and the mountains beyond its frame. She had been the woman for whom everything she saw was overtaken by what she couldn’t say. Now, from the stoop of 1770 House, its doorway light flicked off, Beatrice shouted that I should follow her, that she knew Niko, who ran the basement bar and who kept it for her, after hours. He’ll find you prettier than I can like, but we’ll make it go.

At 15, I was an apprentice in Edward Albee’s summer repertory company, the playwright recalled–especially–for his ranting couple with the fictive child strangely capable of dying, or at least of being mourned. Our crew hammered sets, rehearsed lines with actors whose misremembered words shook sideways on the air. All of us stood in the light of this Beatrice, in her late fifties, so closely resembling her name: she who made happy in particle and wave, the lead in every production that we mounted for Mr. A, as he decreed we should call him, her straw hair flecked as if with bits of raw honey, eyes broad enough for any world to fit there. I found Niko in them while he brought the Planter’s Punches that Beatrice paid for, his left hip warm against my shoulder. He smelled like the rain banging at the bar’s windows, seeping through panes that dated back to 1663, when the hotel had been a house. Beatrice and I sensed old chronicles encroaching through the vents. You didn’t need to talk about them. There were everywhere you could look.

At the tail-end of the seventeenth century, Niko’s basement bar was a kitchen of slop-pails and hooked meats, peopled by the kind that the Long Island newcomers resisted seeing, even as everything above pivoted on the place below. Once their brown, their black bodies slowed at serving, foisted under floorboards, between walls, behind the storage room, accompanied by fragments of the wampum and corn husk dolls that those above stairs failed to value, they were made to brace the house that had rebuked them, though they powered the way it ran. Beneath her bare toes, Beatrice and I heard the murmuring.

We didn’t talk of Mr. A and his Montauk estate, clumped on high dunes too frail for the weight they were forced to bear. We didn’t talk about Niko renting himself out at parties under what Mr. A pinpointed as his portico, though the loan, we must have guessed, involved more grappling than Niko planned for. We chose to bypass the subject of a young Christopher Walken, his hair growing thickly in golden bundles if you watched, his Oedipus a Theban king, however betroubled, wedded to the thwack and wallop of bubble gum chomping, nightly. He’d stick it on the throne at center stage, a gift that Beatrice, his multiply familial queen, couldn’t coax him out of giving, to which Mr. A offered a silence, sacred, unyielding, like some misdirected vow. We avoided the topic of Moss pacing the area just inside the theatre doors, at each performance trailed by his whispering of the words he didn’t know how to lose. I wanted to tell Beatrice that I had denied my father’s fist and was living, too soon, with a woman whose love I mistook for safety. That behind this safety moved all the men I’d chosen before her, in a space populated by longings I didn’t know how to judge or not to answer. But, finding a pen in her skirt pocket, across our paper tablecloth, over every red and blue gingham square, Beatrice began to write what she called one of her rectangular stories, about how taking and mistaking always seem to fuse:

She’s the four year old in a poplin dress whose mother, Dorothy,
stands tall as a cloud, so that bending down, Dorothy brings a whiff
of sky with her. This little girl, with the honeydew eyes, her chin
a pointy V, a line under her lower lip to remind her that
talking is only what you do when prodded, knows how her mother’s
name means the gift of gods, the donation from what you can’t see
to the world that is. She knows that Dorothy huddles in the doorway
with uniformed men, their hats like wings, their whispers
like the breaking open of a tiny box to discover the prize
of words inside it. She knows that her father walks somewhere
in northern France, that in 1918, the great bunt and blare
across the ocean starts to hush, that the ailanthus outside,
sounding slightly larger than silence, arrows down its suckers
as if being born anew on other ground should be a simple thing.
She hears Dorothy read Empedocles to her in the mornings, one
finger in the air bobbing the tempo of every line, learns that
you can, at times, have been a boy, a bush, a girl, a bird, a fish,
small words aiming at bigger things, at the moment when, months
from now, she and Dorothy will be waiting on the Dorset coast.
They will sail over ripples to where her father no longer is,
upright. She will be made to understand that a viral slide from trench
to trench to plain has stuck her father in the earth, from which
he may only stand up as something else. The graves, their
sun-bleached crosses, are massed on cliffs above water that forever
outreaches what her mother calls our geometries. As Dorothy
moves closer, the girl will almost find it possible to ask:
how can I ever know whose hand I’m holding? 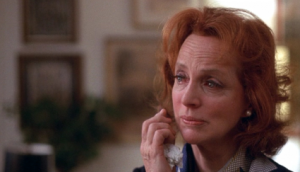 It’s forty years after Beatrice finished writing, reviewing the near trident of lines on my right palm, saying that they tell us we once belonged to the sea, incanting Rilkean words about how any arrow, in its momentum, outlasts the string and becomes more than itself, that the outlasting will be something I’d come to. I’m in my Brooklyn apartment half-listening to, but not getting lost in, the hopeless little screen that Leonard Cohen sings of, where too many faces fling out words among images that never slow and let the looker in. Turning, the screen awash with her, I see Beatrice in the last five minutes of the film that won her those many shiny, naked statuettes, the ones meaning: Network and its director, Sidney Lumet, give us pictures we know how to read, how to insert into a world that we allow ourselves to recognize, while we tally all the takings. In a navy suit, that scarf an overcareful knot at her neck, Beatrice wholly, briefly, is

Louise in her Upper East Side kitchen, not quite
eating her lunch, not quite looking at every salad leaf
that she fails to eat, waiting for her husband, absent
from their bed for days. Max, she knows, is busy
with the body of Diana, the programming executive
who oversees him at the television station, she who
aligns men (they are always men) with their performances,
with what they buy, sell, with how they enact the buying
and the selling, while Diana moves beyond any method
for prediction, changeful like an autumn day, before the
sun, at last, goes. When Max returns, dry and red around
the mouth, a flare in his eyes, Louise can already plot
his words: I leave you for a woman I can’t
outguess, whose will lives where her heart ought to pump,
who will puncture me in ways I won’t know how
to foresee. Shouting that I hurt, I can hurt, I
puncture and am punctured, Louise extends to him
all the declarations that she never knew how to give,
when she loops back to the kitchen, where the late
light greens. If the credits’ scroll could have been delayed,
we’d watch Louise gaze through the window above the sink
at synapse after synapse, firing, fretting across the sky,
even if that sky has no brain, and these are electric
volleys, charging down. But much can come of lightning.

Below my kitchen window, a magnolia in the back garden plumps its blooms. The wind twists, thickens. And I know that it’s about to rain. 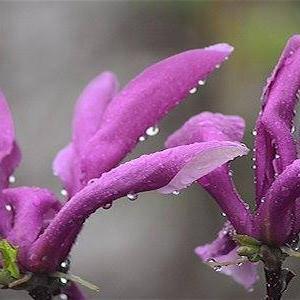 Bruce Bromley, at 15, was an apprentice in Edward Albee’s and Richard Barr’s repertory company at the John Drew Theatre, where he performed shifting roles as a member of the Greek chorus in The Palace at 4 A.M., by Howard Moss, a retelling of the Oedipus story. Now, he teaches writing at New York University, where he won the 2006 Golden Dozen Award for teaching excellence. Dalkey Archive Press published his book, Making Figures: Reimagining Body, Sound, and Image in a World That Is Not for Us, in 2014. He has performed his music and poetry throughout Europe and the US.
Loading Comments...