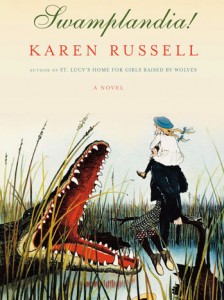 Here’s the truth: It will be impossible for my review of this book to be unbiased in any way because I am just pretty much madly in love with Karen Russell. She’s a magnificent writer, and I’ve spent a lot of time with her impressive first collection, St. Lucy’s Home for Girls Raised by Wolves. Like her debut novel, it too is wonderful, and you should certainly check it out if you have not yet had a chance to delve into this gem.

Swamplandia! follows Ava Bigtree and the Bigtree family as they fight to save their alligator theme park, located in the Florida Everglades, in the wake of Ava’s mother’s untimely death and the opening of a bigger, better completing amusement park on the mainland. The novel becomes a triple coming-of-age story for each of the three Bigtree siblings, Ava, Ossie, and Kiwi, and it is also a painful exploration into the complicated cycles of grief and identity in the aftermath of such a tragic familial loss.

Having lost my own mother a few months after my eleventh birthday, just two years younger than Swamplandia!’s brave protagonist, the hurt in this story was immensely relatable. But even without this connection, one of the most brilliant things about this book is the way in which is takes its incredibly foreign and unique characters and setting (alligator wrestling, possessions by ghosts, a theme park modeled after Hell, a mysterious bird man, a depression-era swamp dredge, the list could go on and on) and makes them immediately plausible, ordinary, and familiar.

Another striking feat of this novel is that each sibling experiences a deeply complex coming-of-age almost exclusively alone (either physically, emotionally, or both), and the quality of Russell’s writing is so good that the burden of this isolation is magnified onto the reader. I finished this book feeling more lonely that I’ve felt in a long time—but it was partly that well-known feeling of loneliness born out of turning the last page of a great novel and knowing that you’re saying goodbye to a wonderfully invented world you’ve inhabited almost without realizing it, as well as to each meaningful character contained within it.

Despite the (frankly tired, in my opinion) criticism Russell sometimes gets about her unnecessarily extensive vocabulary usage, particularly when writing in a child’s voice (I think you’re doing great as an author if this is what people are finding to complain about, by the way), I simply can’t recommend this book highly enough.

Read it? I’d love to hear your thoughts in the comment section below.