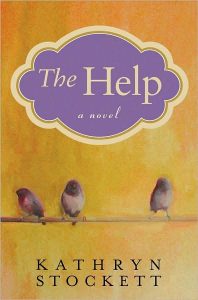 I’m happy to report that so far I’m about two-and-a-half times as fast at reading than I am at reviewing. : )

Stockett’s novel chronicles the lives of several southern women in the early 1960’s: Black maids caring for white children and families, as well as a few of the white women who have hired them. Just home from college and swept up by the momentum of the early stirrings of the Civil Rights Movement, Skeeter Phelan, one of the books protagonists, begins to question the treatment of the black families in her town. Along the way, she forms a close bond with Aibileen Clark, a black maid working for one of her friends, and together they embark on a complicated, difficult, and secret battle toward social change.

I started reading this novel at my grandparents’ house in Savannah, Georgia over the Martin Luther King Jr. holiday weekend, which gave the book a really interesting (and extremely appropriate) context. As a child, I remember listening to my mother tell me stories of her family’s own maid, Nelly, who cleaned the house and helped take care of her and her younger siblings when she was growing up in Atlanta, Georgia in the 1950’s and 60’s.

My grandmother spoke repeatedly about how lucky her family had been to have Nelly, how special she was, and how she was “one of the family.”

“Did you make her use a different bathroom?” I asked, since this was a pretty significant point of contention early on in The Help, and I was relieved when my grandmother balked at this question.

“What? Of course not. Sometimes she would get in the bath with the kids. We didn’t care. She was great.” Then my grandmother told me a story about letting my mother, as a toddler, go home with Nelly one weekend after my mother’s insistent begging. She even went to church with Nelly that Sunday. My grandmother spoke of this memory fondly, laughing happily even now, almost sixty years later, at the thought of her young Jewish daughter at Nelly’s church. “She had so much fun that weekend,” my grandmother said, “she talked about it for weeks afterward.”

“What did your neighbors think,” I asked. “Was this type of relationship the norm?”

“No,” she said, and here, for just a moment, she looked a little sad. “I guess we were considered progressive.”

It was interesting for me to think of my grandmother, who I find to be a fairly conservative woman, as someone who was once called progressive by her community like it was a dirty word.

Nelly died when my mother was in high school, shortly after ending her employment with my grandparents as they prepared to move to Savannah. My mother came home from the funeral miserable and angry. She was one of perhaps only a dozen or so people in attendance, and she was, my grandmother seemed almost certain, the only white person present. I regret that my mother is not alive today for me to ask her about her own experiences with Nelly, to compare her life to what’s laid out in Stockett’s novel. My grandmother told me that she had a hard time reading The Help. “I got through about forty pages,” she said, “and then I thought, ‘I lived this, why do I need to read about it?’”

But, I’m embarrassed to admit, even after the perspective I gained from those conversations, the time period and lifestyle conveyed in this book were still difficult for me to comprehend in a realistic, meaningful way. Stockett does an excellent job of bringing an early 1960’s Jacksonville, Mississippi to life in the pages of her novel, but at no point can I reach beyond the text and picture the story as something other than fiction. This is in no way a failure on Stockett’s part—it is a deficiency of my own. Even the LGBT equality movement or what racism still looks like today in America can’t really equate to what this way of life must have been like. Trying to really place myself in this environment is like asking me to imagine what it would be like to run a recon mission in Fallujah. I can understand it as an abstraction, I can grasp why it’s horrific, but it’s impossible for it to feel truly real to me.

What was easy, however, was getting wrapped up in this book, to lose entire hours telling myself, “Just one more chapter….” The characters are engaging, vivid, and personable, and the story is thoroughly interesting. The pacing is slow in just a few places, but not in a way that makes it unreadable or boring; in fact, I felt that this lent credibility and authenticity to the storyline. The ignorance and hatred of some of the characters instilled plenty of anger and disappointment in me, and there were also several poignant and truly beautiful moments of community and outreach that brought me to tears. There is a lot of emotion packed into this lovely book, which definitely makes it one I’d recommend.