Lorrie Moore, Who Will Run the Frog Hospital? 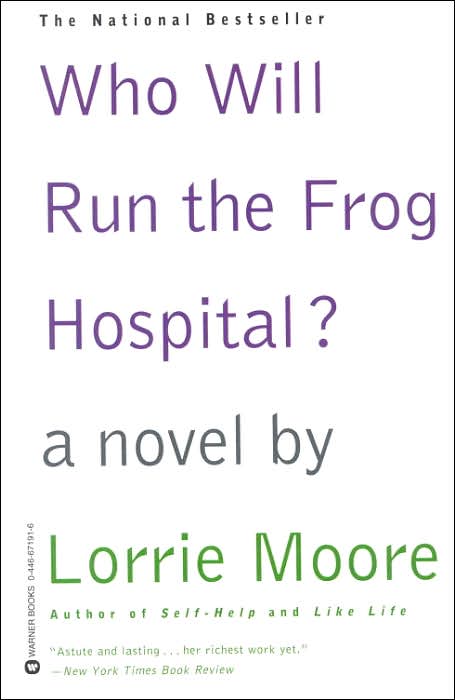 Moore’s slim novel took me two tries. I sat down some number of months ago and read the first eight pages of Who Will Run the Frog Hospital?, the book’s opening section. It felt too dense and disconnected—I couldn’t find anything to grasp onto to pull myself through. I felt a little bored. I put the book away.

When I came back, the first eight pages were still slow, and it was still difficult to find my footing in the story. But then Moore cuts away from the present moment, where readers are with the protagonist, Berie Carr, and her husband, Daniel, in Paris, to Berie at fifteen, working at an amusement park called Storyland with her best friend Sils. In about two pages, the book suddenly becomes all the things I needed it to be—relatable, engaging—and it also very quickly becomes stunningly and beautifully written.

The book falls easily and naturally into a format that switches between Berie’s teenage life with Sils and her current adult life as she and her husband vacation in Paris. It’s meant for anyone who has ever been a teenager and now is not, for anyone who once had an idea about what their life might become and then entered reality, gained an adult perspective, grew up.

Moore nails the deeply complex and multi-layered lust-love that inhabits the intensely close friendships of teenage girls, as well as the longing and nostalgia one feels as an adult looking back on their younger self. She even brings life to the complacency, boredom, and resignation that accompany a marriage that is no longer fulfilling—a muted and lingering unhappiness. While doing all of this, she also writes gorgeously:

I often think that at the center of me is a voice that at last did split, a house in my heart so invaded with other people and their speech, friends I believed I was devoted to, people whose lives I can only guess at now, that it gives me the impression I am simply a collection of them, that they all existed for themselves, but had inadvertently formed me, then vanished. But, what: Should I have been expected to create my own self, out of nothing, out of thin, thin air and alone? (17)