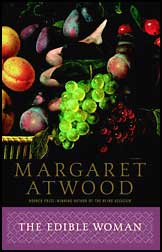 I’ve been surprised to learn that (at least until I discovered Grey’s Anatomy is on Netflix) finding time to read while caring for a newborn (especially while breastfeeding) has been super easy. But time for review writing? Well, not so much. Case in point: I finished this Atwood novel more than two weeks ago. Still, better late than never:

When I attempted this 100 books project the first time back in January of 2011, I began with Margaret Atwood’s The Handmaid’s Tale (read the review here), which had long been recommended to me by several friends/colleagues. I loved it, and it remains in the top 5 of my list of all time favorite books. I was excited to return to Atwood this year with The Edible Woman. I’m sad to report, upon its completion, that I didn’t think much of it.

The prose sounded distinctly Atwood (if I’m allowed to make that judgement, having now read only two of her many, many novels), but unlike in The Handmaid’s Tale, in which her vivid and lengthy descriptions are achingly beautiful and enrich the heartbreaking loneliness and despair found in the pages of that book, the details in The Edible Woman come across as unnecessarily long, boring, and a little self-indulgent, and I found myself sometimes skimming several paragraphs and thinking, Get on with it already.

Additionally, the protagonist, Marion, is not very likable, which made it difficult to become invested in any of her conflicts. The other characters, who are also pretty unlikeable, are at least a bit more engaging, particularly Marion’s fiery and deceptive roommate, Ainsley, who tricks a man into impregnating her, as well as the mysterious Duncan, whose friendship with Marion threatens to dissolve her engagement. These two are the ones who kept me reading until I reached the end of the novel, long after my interest in Marion’s passivity and inaction had waned.

It’s impossible to talk about Atwood’s writing without talking about feminism (or protofeminism, as is the case with this novel, which was first published in the mid-1960s). The Handmaid’s Tale is layered with feminist themes, making clear through the compelling narrative what a loss it would truly be to both genders if society were to devolve into the alternate future that book presents. The Edible Woman, while exploring similar themes, delivers them much less successfully, and these ideas, like the characters, come across as frivolous and trivial.

I’ll of course continue to explore Atwood’s other work, but I can’t recommend this particular novel.

Be on the lookout for some poetry reviews in the coming weeks!