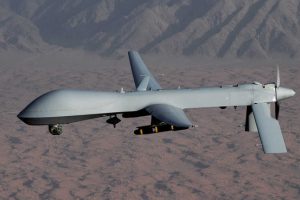 This is a Predator aircraft, also known as an unmanned aerial vehicle (UAV), also known as a drone. The U.S. uses them every day in Afghanistan and Pakistan to seek out and destroy terrorists. Their use is relatively new, but we’ve heard enough about them at this point that they’ve become ingrained in the American cultural psyche. There’s a drone aircraft hanging on display at the Smithsonian’s Air and Space Museum. Kids with ice cream cones have their pictures taken in front of it.

President Obama has had great success killing Al Qaeda operatives with drone attacks. Of course, that depends on what you think “success” means. Dead terrorists are one thing, and I’d argue there are serious ethical questions about killing them. One could go round in circles about the moral gray zone concerning killing poor, mostly powerless individuals who’ve chosen to take up arms against what they see as a suffocating, immense military power like the United States. I’ll leave it be. The greater concern is the killing of innocents. Whether it’s 1 person or 1,000 doesn’t matter. Obama’s administration fudges the numbers anyway. Some consider the violent death of innocents collateral damage, a sad but necessary consequence of any righteous war (see Britain’s burning of NYC, Sherman’s march to the sea, Dresden, Hiroshima, Baghdad, etc.). But most on my side of the political spectrum – otherwise known as the Left – consider collateral damage a common ugliness perpetrated by a domineering, violent Western power, particularly the United States. 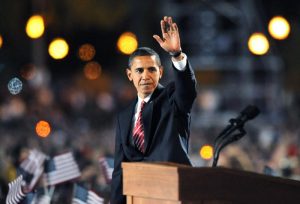 Fine. Well and good. So it is. But President Obama confuses things. In 2008 I voted Democratic for the first time because of him. I joined half a million people at Grant Park in Chicago to celebrate his victory in November. I got into heated arguments about how fantastic the guy was, how much he seemed to agree with me, how we shared belief systems, wanted to live in the same world, felt the same way about government. Yes, he made me idealistic, he made me believe in the whole Change thing. It was okay, as a self-respecting Left Wing rebel hippie Commie pinko wackadoo revolutionary, to love and support a mainstream candidate for the presidency.

That was then. I voted for Obama because I had faith in him. He and my ideals lined up, and I’ve always voted my ideals. Isn’t that what the vote’s supposed to be about? Well, there are two ways to see it. Either you vote your ideals, or you vote pragmatism. The old heart vs brain confrontation. This year, my heart tells me I can’t vote for President Obama in November. My brain tells me I must. That’s not to say I’ll vote for Mitt Romney. The guy creeps me out. I might consider not voting at all. Despite the judgment that might befall me, I consider an educated non-vote as much a responsible piece of self-expression as a vote. There’s another option, though, and you’ll have to bear with me: The Green Party.

Ever since 2000, when I became old enough to engage in a presidential election (I turned 18 the week after the election – Damn!), the Green Party has represented my most cherished beliefs regarding politics, the environment, minority rights, women’s rights, war, and society at large. Unfortunately, the 2000 election and Al Gore’s pathetic showing against George W. caused a severe backlash against the Green Party that has lingered ever since. Even stalwart Ralph Nader supporters like Michael Moore and Bill Maher have made it clear they’re no longer interested in anything but the Democratic Party when it comes to mainstream elections. The fact remains, however, that the Green Party remains the only party that seems to truly line up with my belief system. 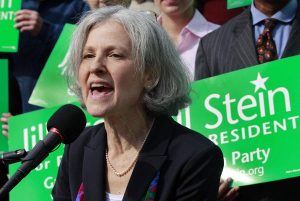 While President Obama’s tenure hasn’t been what I would’ve liked, I might be able to overlook his dithering and spinelessness on issues like political partisanship, health care, and the economy. I can’t, however, overlook his continued execution of drone attacks that maim and murder innocent people. Each casualty  feels like another bloody knife in the dark waiting to strike back at us in some unforeseen, horrific way. Some might say that he’s no different from – and far better than – almost any president who came before him. But if this is the case, I shouldn’t have voted for him in the first place? Not only this, but when do we draw the line? When do pacifists sickened by war and death say No?

Being president is certainly tough work, and perhaps one can’t afford to be an idealist in the Oval Office. But I’m not president, and all I have is my vote. Shouldn’t I wield it in the way that feels most true to the future I want to see, even if it means voting against the last best hope of the Democratic party and the Left Wing of the political spectrum? Even if it means voting against the first black president of the United States?

Even if it means a Republican president?

I just don’t know. The most unfortunate thing is that, whatever I do, I expect to leave the voting booth with a heavy burden on my conscience. That’s a far cry from 2008.

Sam Ramos is from Austin, Texas. His fiction has appeared in Hobart, Spork, Pindeldyboz, Jettison Quarterly, and Empire Builder. He is currently seeking his MFA in Creative Writing and studies art history at the School of the Art Institute of Chicago.