The prolific American poet discusses language as music, the politics of war, and his new collection, Beautiful Country. 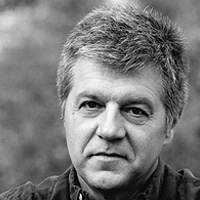 Robert Wrigley has published eight collections of poetry, the most recent of which is Beautiful Country (Penguin, 2010). His poems have appeared in many journals, including Poetry, The Atlantic, Barrow Street, and The New Yorker, and were included in the 2003 and 2006 editions of Best American Poetry. Wrigley’s honors and awards include fellowships from the National Endowment for the Arts, the Idaho State Commission on the Arts, and the Guggenheim Foundation, as well as the J. Howard and Barbara M.J. Wood Prize, the Frederick Bock Prize from Poetry magazine, the Wagner Award from the Poetry Society of America, the Theodore Roethke Award from Poetry Northwest, and six Pushcart Prizes. From 1987 until 1988 he served as the state of Idaho’s writer-in-residence.
Loading Comments...