“Kinsey’s work captures the universal essence of the human condition mainly through an energetic portrayal of urban figures. Working spontaneously, and utilizing a range of mediums, he constructs multi-layered, textured environments easily likened to the complexities of contemporary life. His images depict beings who are both triumphant in their defiant stance to their surroundings, and tragic, as they transmit a visual display of raw emotion and jangled nerves.” 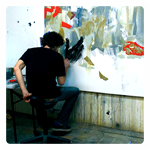 Dave Kinsey’s work has been shown in galleries and museums worldwide, among these a recent exhibition at the URBIS Museum in Manchester and Art Brussels in Belgium. He has also been featured in such publications as The New York Times, Black Book and BLK/MRKT One and Two, and invited to speak at numerous institutions such as The Art Center, UCLA, Montserrat College of Art and most recently, The Semi-Permanent conference in Sydney, Australia.