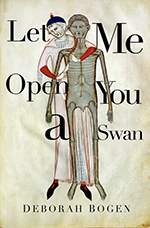 Upon reading Landscape with Silos, Deborah Bogen’s first award winning book, one could recognize authentic, accomplished poetics. In her new book, Let Me Open You a Swan, Bogen again lays out a moving constellation. The girl who once kicked a can down the road now reconstructs a landscape and lays out the architecture of a mind. In increments, Bogen’s poetry moves from images of the superstitious augury of animal parts to images of the scientific dissection of a body. All are in the metaphorical service of contemplating an enigmatic imagination.

The poems are divided into four sections. “Landscape,” the first section, introduces the harshness of Bogen’s beginning. Memory will be joyously referred to or suffered. Observations give rise to (and are the basis of) poetic creation. Hinging the concrete to the abstract is often the creation of metaphor.

Remembering meant hoisting into sight,
but the teacher said she was too distracted
— said she had a problem with distraction.

People must pay attention to many things at once,
harmonicas and lemons . . .

But her thoughts were a slow migration,
this way, they said, feel this.
And she had come to love her own words.

… the words lodged themselves in her chest between

the slickery heart and the milkrinous spine.

The need for fuel fires the imagination in a depressed father’s suicide, a young girl’s escape out of a “two-horse” town, the car of an amorous man who has a fat wheel of pool-hall winnings stuffed in his jeans. This is the landscape of a restless Dakota child, of God-fearing generations, of butterflies pinned to a mat, and of a grandmother hanging sheets like sails that can’t catch the wind. Fuel has a connection to transport—and where there is transport, there is escape. Somewhere in a distance, a political monk strikes a match and fires a lethal protest. At the end of one of the poems, the poet evokes night skaters and croons:

See how the world’s gone boney white,
a blistery storm full of hooks and hammers,
the brain a belfry of memory and shadows – 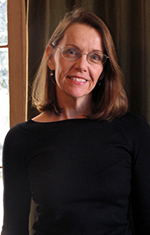 The second section of the collection is “Religion.” The transport from locus (place) to logos (word) expands. Children making snow angels give way to a girl transported by a Hell’s Angel, give way to heavenly angels, the colicky messengers of God (and the announcers of resurrection). Escape gives way to eros and ethos and grief. In one poem in the section the poet evokes the lyric of a long-dead sister:

In Pittsburgh, the dark is never really dark which is the way
I am alone these days

…Nothing mine except the whistle of the same train leaving,
box cars empty,

… We used to whisper in the big bed
wondering what the grownups were really up to.

Here’s what I know so far: God’s long division.

(“Poem For My Reader: A Long-dead Sister”)

“Migraine,” the third section, is a mixture of suffering pain and hosting transport:

… my temple,
tempering touch to make the Visions disperse
before Revelation claims me….

Understanding is best got beyond
some say,
but a one-eyed archer sits at the murder hole,
and already he’s taken aim.
God’s landscape is obscured by my high-jacked
brain cells, neural pathways wending
to a narrow widow’s walk, my head become electric
with suspense: seeing the two worlds.

Is the archer aiming for “the swan?” And if struck, might the swan break into its final song? What sort of augury abides in this constellation, this collection, of poems?

In “Art,” the final section of Let Me Open You a Swan, the gentle adjuring of the poet “to allow her” to allow us to witness the autopsy—or dissection–in the title comes around full circle. But the poet, too, as witness, is auspiciously transformed by the rite:

It’s love that knuckles down, that struggles
to tell the tumor from the bright idea,
paring memory to bone and turning truth into
something better than monument.
There will be months and years when you can’t
see, a gauzy past in the air and no light.
Then one day, the flock lifts.