I’m writing jokes these days, as in: How many Lutherans does it take to change a lightbulb?

I started writing them after we read Mimi Schwartz’s essay “Elegy for an Optimist” in my Intro. to Creative Writing Class. It’s an illuminating downer–about Schwartz’s father-in-law who suffered too much and too long due to those dogged physicians who kept the intravenous streams of chemotherapy flowing into his eighty-year-old veins instead of sending him to palliative care in Hospice.

But it was heavy material for students to whom I am teaching the art of the image and sensory access to experience. It was a bit much for me, given the inordinate amount of rain that has fallen on Tennessee in the last month.

To move the energy, I followed with a writing assignment to write jokes. 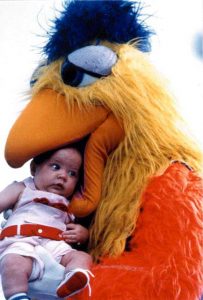 I wondered if one can experience similar growth through humor as through tragedy. Humor may be closer to palliative care for suffering, but I have experienced some jokes that exposed me to surrealism or wonder. There are the Dead Baby  jokes in a book I found in the downstairs closet, which taught the price, if not the feeling, of compassion. We laugh with hesitation. We gape in astonishment. There was the whale joke my friend Robert told me outside the Chattanooga aquarium that requires making a forty second-long whale sound. The joke depends entirely on laughter as relief for social awkwardness. Jokes expand our social comfort even as they comment on it. Most jokes define insiders and outsiders until we can laugh at our boundaries.

But, I’d like to ask the readers among us who have a degree not in hard knocks but in the slapstick school of education: has a joke ever schooled you?