When his wife asked him for a divorce M drove down the New York State Thruway from New Paltz into Manhattan and checked into the Pierre Hotel.

Catherine hadn’t been specific; it had been understood for some time that things were not working. M pouted, pleaded, tried to be charming, threw a fit, attempted to argue her out of it, and finally resorted to negotiating, but nothing worked. Catherine was firm. “Look, let’s just forget it,” she’d said.

M chose New York for its anonymity. He wanted to become invisible, his childhood wish. The argument with Catherine had discharged so many violent emotions that M had trouble remembering who he was. If he was no longer married than who was he?

He removed his wedding band and laid it on the dresser. Then he thought better of that and placed it in his billfold. He looked down at his bare hands and wrists. The ring had left an indentation on his finger. He placed the thumb and forefinger of his right hand in the ring groove and traced the circle of bruised flesh.

Exiting the hotel, M turned north and walked alongside Central Park in the shade of the large overhanging trees. It was midsummer and everything was in bloom.

At 70th Street he looked across the avenue at a tall black gate which guarded—what? He couldn’t remember. He hadn’t been to the city in years. Crossing the street, he joined a small group of people waiting to enter the building.

It was an art museum. The handsome building had been a private residence that now housed a remarkable collection of Old Masters. There was an intimacy to the collection that seemed to invite M directly in. To look, undisturbed.

He wandered through the library and the family room and paused to admire an elegant staircase leading to the family’s living quarters on the second floor of the residence which was roped off. Standing at the base of the staircase next to the bust of a woman mounted on a pedestal, M looked at the forbidden second floor. A painting was hung on the landing, and two candelabras framed magnificent gold inlaid ornamentation that resembled the cabinets of a cathedral pipe organ.

M walked down the long dim hallway and stopped to look at a small painting. It was a Vermeer. A young girl sits at a dark table. Sheet music lies on the table, and a man holds with his thumb another sheet of music, which the girl also holds with both hands. But she is not looking at the man, whom M supposes is her teacher. Her face is turned toward the viewer, as if she had been interrupted at her music by M himself. She wears a look of mild astonishment. Her fine head, sheathed in a white scarf, is turned away from her music. She looked directly at him.

Unnerved, M peered at the title of the painting: “Girl, Interrupted at Her Music.”

Two weeks after 9/11 M had traveled with Catherine to New York, where they bought a grand piano at Steinway Hall on West 57th Street. Catherine had been a music major in college, and taught private lessons for many years. Over time she had stopped giving recitals, and eventually she ceased to play. Her Baldwin spinet piano held dozens of family photos, of their children and their dogs and horses, but no music. Making a present of the Steinway, it was thought, would spur her to play again. And she did, for a time. But then the grand piano stood idle as well. No pictures were mounted on it.

Now as he returns the gaze of the girl in the painting, M thinks of his wife, whom he had left standing in the hallway of their house, she holding the mail, he reaching for his car keys. Her face was careworn, and puffy from crying. A strange, lonesome pity enters his heart to think of her. He had never known Catherine in her girlhood, had not in more than a dozen years asked her a question about how it was with her in those days when she was a child, raised by a widower, who managed to see to it that she continued her piano lessons after her mother died. By the time they had met, in college, Catherine was an orphan. He stares now, at the girl interrupted at her music, and he feels his soul run away, the solid world dissolve to tears. He tries to release his gaze but the girl goes on looking at him, startled. 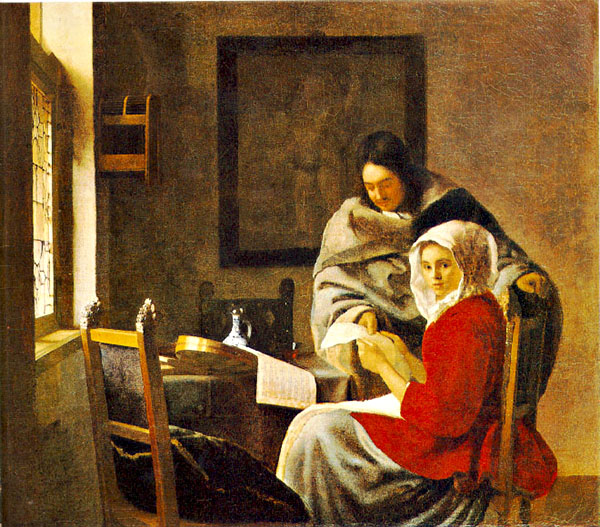 Gary Percesepe has published short stories, poems, essays and reviews in many journals, including Mississippi Review, Antioch Review, Westchester Review, Rumpus, Pank, Word Riot, Necessary Fiction, Metazen, elimae, LitnImage, 971 Menu, and Moon Milk Review, among others. Along with Susan Tepper, he co-authored the epistolary novel, What May Have Been: Letters of Jackson Pollock and Dori G (Cervana Barva Press), which was recently entered for a Pulitzer Prize. He recently completed his second novel, Leaving Telluride.
Loading Comments...