Anyone who’s taken a writing course, browsed a bookstore, or talked to a writer knows there are piles of writing guides in the world, books of advice on everything from technique to style to subject, usually by writers and for writers. I’ve heard some say that they religiously shun these books, but personally I buy nearly every one I can find. Really, I think it’s just because I’m a weirdo who likes to collect information that may or may not be relevant, but Janet Burroway suggests that there may be a deeper reason: writers are fascinated with the thoughts and habits of other writers because deep down we’re really looking for a secret to make our jobs less awful.

But, as I said, there are lots of these guides out there in the world, and not everyone cares to own them all. For that reason, I’ve decided to do a short series called Guide to the Guides, where I discuss some of the pros and cons of some famous fiction-writing how-tos. Up first is John Gardner’s classic, The Art of Fiction. 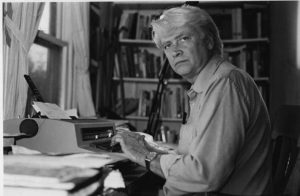 All in all, I recommend any interested writer look into Gardner’s book, with the caveat that skimming and skipping is perfectly acceptable. I found the first half of the book interesting, but if you get tired of his digressions or just don’t care about the theory of fiction and want to get to the technical parts, you don’t miss much by jumping ahead. And once you get to the second half, you can get the gist of his notes without reading all of his obsessive rants.

If anyone has a different view of The Art of Fiction, I’d love to hear what you have to say. And check back later in the week, when I continue this series with a look at Aspects of the Novel.